I had a pretty early start from Julia Creek and with only about 135kms to Cloncurry arrived in plenty of time to do some shopping. While I was at the supermarket, Shirley, whose house I was going to look after in Mt Isa rang me, and when she heard where I was suggested I go to the bakery down the road for good coffee and great pies. She wasn’t wrong!

At the bakery I was sitting down enjoying my pie – you know how it is – hot pie running out all over your hands, burning your fingers off, you can’t lick them because you’re not sure when you last washed them, looking like a picture of elegance – have you got the picture? I was in a mess! A face appeared in front of me and said, “Rosemary?” It was Lorraine and Rod, caravanners heading to Darwin who I had met at Bedford Weir and last seen at Emerald. What a lovely surprise!

We sat down and had a coffee together and caught up on each other’s adventures. They had travelled here via Longreach and Winton, the way I will go when I leave Mt Isa. I was telling them about Julia Creek and how much I enjoyed it so they back-tracked and spent a few days there, which they thoroughly enjoyed. I am so glad – you know what it’s like when you recommend something – it can be disastrous.

Thank goodness it wasn’t this hot while I was here!

The Cloncurry parrot is only found in the Cloncurry area in North West Queensland and is a member of the ringneck family of parrots.

Cloncurry is locally called ‘The Curry’ and here’s some information I found out about it.

Cloncurry breathes cattle and has copper and gold in it’s veins. in 1867 Ernest Henry and Roger Sheaffe started a joint pastoral-mining venture on the banks of Cloncurry River, named by the ill-fated explorer Robert O’Hara Burke in 1861. The town was proclaimed in 1884 and boomed into the 20th century with merchants, carriers, miners, builders, bakers and battlers. Cloncurry was the biggest, boisterous town in the outback Queensland between 1880s and 1960s. During WW1 Cloncurry was the main source of Australian copper, with 7000 people working many mines and four smelters.

Cloncurry is a lively, multi-racial town. Aboriginal people have intermarried with European, Chinese and Afghan newcomers for the past 120 years. In 1900 Cloncurry was a Ghantown with 200 Afghans working over 2000 camels. Chinese market gardens also bloomed along Coppermine creek.

Cloncurry has the original hanger with Queensland and Northern Territory Aerial Service (Qantas) still on the front. There is a monument to commemorate Qantas, which flew its first passenger (Alexander Kennedy) from Longreach to Cloncurry on November 3rd 1922 at a cost of 11 pounds 2 shillings. 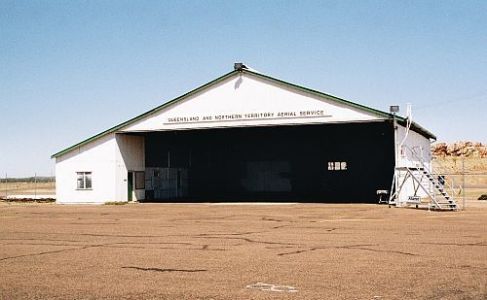 In 1928 the Royal Flying Doctor Service was established in Cloncurry by Rev John Flynn , choosing this town as his base because of its proximity to the mining camps and scattered pastoralists. At that time there were just 2 doctors providing the only medical care for an area of almost two million square kilometres. The RFDS now has 13 flying doctor bases around Australia and services about 6.9 million square kilometres, or 80% of the Australian continent. This is the most comprehensive aeromedical emergency and health care service in the world. You’ll recognise his face on our $20 note. Flynn was a Presbyterian minister and this picture has some great information about the images surrounding Flynn on the $20 note. 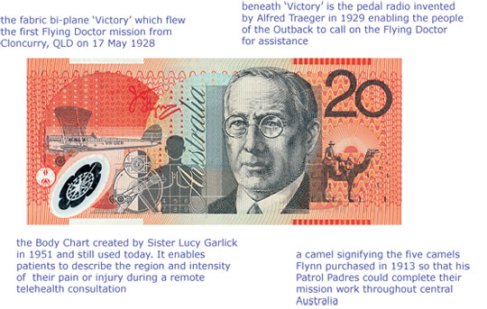 I’d forgotten to empty my porta-loo in Julia Creek so headed to the information centre to find out where the dump point was. This was not a good experience. Two very snooty ladies were manning the desk, and when they finally bothered to speak to me they informed me that I would have to book into the caravan park if I wanted to empty my toilet. They didn’t offer me any other information about the town, didn’t encourage me to look at any of their displays and I felt like it was a real effort for them to even acknowledge my presence. Needless to say I didn’t hang around there for long and decided to head to Corella Dam where I would spend the next 3 days before I arrived in Mt Isa.

2 thoughts on “On the Last Leg – Cloncurry”