I don’t think I’ll ever get rid of the fine red dust that has made its way through every crack and crevice in my campervan, covering everything – and I mean everything – in Pilbara dust. Nothing escaped! It filtered into every cupboard, all my clothes, my bedding, my curtains, my pantry – and continues to do so every time I go over a bump. It’s hiding everywhere just waiting to dump itself on me somehow! Love the Pilbara – hate the dust!! 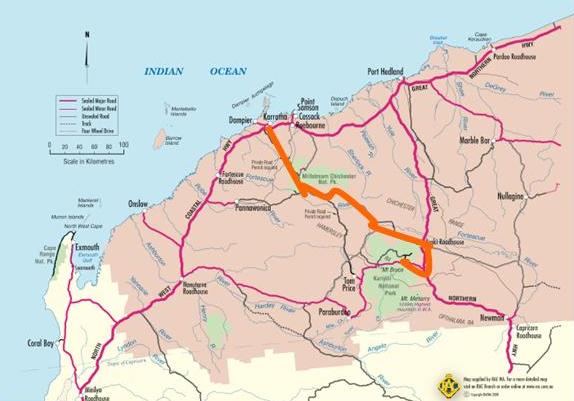 The road to Millstream Chichester National Park was a nightmare and the main cause of the dust invasion in my van. It was rough, corrugated, red and seemed to go on forever. Wilma and I had looked at all our maps and decided to take the road south of Karratha instead of the road from Roebourne, or the one even further north near Port Hedland. Those other roads were black top, but not ours! My normal map source doesn’t even show the road we took, but this is a great map of the Pilbara I found and I have drawn in – very badly in orange – our route.

However, the destination made up for the journey on this occasion and we camped for 2 nights at Millstream Homestead – Miliyanha Camp. What an oasis! We were particularly interested in it because Clint, our aboriginal guide at the Burrup Peninsula was from the Yindjibarndi people and Millstream has particular significance for them. The brochure about Millstream Chichester National Park explains it better than I can, so I quote

“(this)..area is a very significant indigenous cultural site in northern Western Australia. Its cultural and mythological importance stems from thousands of years of occupation, with Millstream being the home of the mythological serpent or warlu, whose presence is still strongly felt at Nhanggangunha (Deep Reach Pool).”

As an aside, the highway leading into and out of Karratha and Karajini is called Warlu Way.

“Aside from its highly important spiritual significance, Millstream was an important campsite for inter-tribal meetings. The Fortescue River provided food and water, particularly during drier months.”

A short walk from the homestead took us to the Lily Pool that Clint, our aboriginal guide at the Burrup Peninsula, had shown us photos of. It was a place of such natural beauty and so peaceful I could have relaxed there for hours.

The water that feeds the Millstream oasis springs from an aquifer, or natural underground reserve fed by the Fortescue River catchment, which includes run-off from the Hamersley Range. This aquifer has an estimated area of 2000 square kilometres and is believed to contain 1700 million cubic metres of water.

As we left Millstream for Karijini we took a side tour to Deep Reach Pool, mentioned above. This view is from the cliff top looking over the Millstream Palms.

There was a pleasant cliff top walk that wound through Snappy Gums and Bloodwood Trees. Are they snappy because they’re angry do you think?? I get a bit that way myself at times! 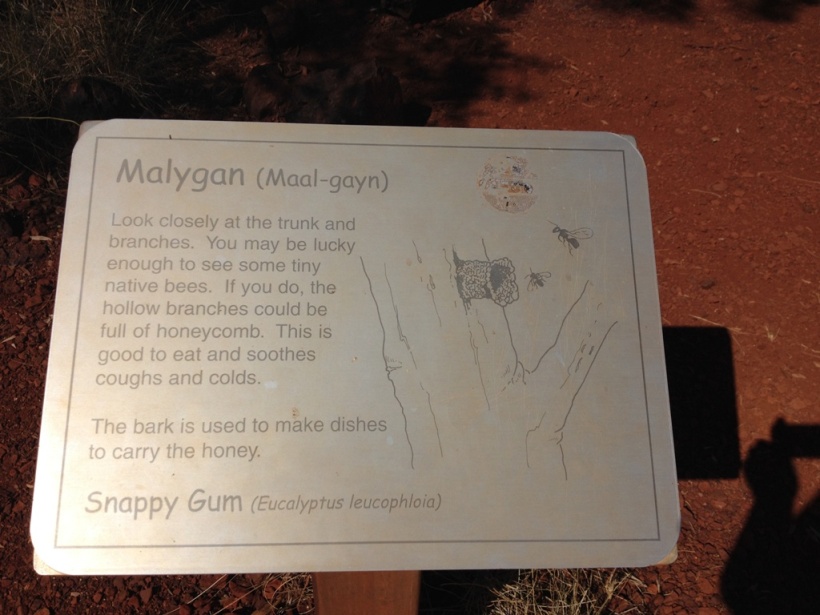 The cliff top walk also included the story of how the Rainbow Serpent created the Fortescue River – pretty gruesome story, too, a bit like some of our Fairy Tales! 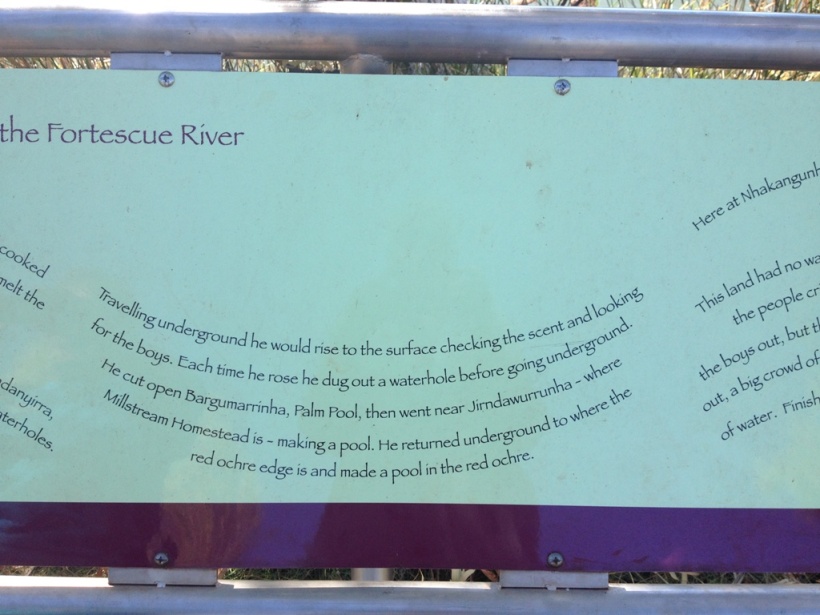 With some trepidation we were on our way to Karijini, knowing that we had to face that nightmare of a road again.

3 thoughts on “Done and Dusty – Karratha to Karijini”