When I left Exmouth I was heading to Karratha and made my first stop at Barradale Free Camp where Wilma, one of the Willie Wagtails I had met, caught up with me to travel north together.

Our first stop together was at 40 Mile Beach, or Gnoorea Point, where we thought we’d spend a week just enjoying the ocean.

After a few kilometres of not bad corrugation we arrived at the camp to be welcomed by the ranger/caretaker. My first sight of the beach was disappointing – mud flats and mangroves – so I asked if there were any campsites on a ‘real’ sandy beach. He jumped on his quad bike, said “Don’t go anywhere until I come back” and took off down the track. About 15 minutes later he came back and said “Follow me, I’ve got just the spot for you!” Off we went, 3 kms down the track, and he advised us the beach was just over the dunes. “Thank you, thank you” we said, booked for a week, and set up camp.

Liar, liar, pants on fire!! What was over the dunes? Mangroves and mudflats!! Away in the distance, about 1km down the beach there was about 50 metres of sand that, you guessed it, became mud flats when you hit the water! Anyhow, it was a pleasant trudge through soft spongy sand to get there, but the nesting Ospreys made the walk worthwhile. We also had a visit from Glenyce Mills, (I had travelled with Glenyce in Tasmania), who was on her way home to Perth after over 2 years living the dream and travelling our wonderful country. And before we left, Jose also paid us a visit on her way home to Perth.

Both Wilma and I were well and truly ready to leave after 6 days, so we packed up and headed to Karratha.

Wilma was staying in the Dampier Transit Park while I stayed with Brett and his friend Paula in a real house, slept in a real bed, bathed in a real shower (not a bucket like I usually do) and ate meals made in more than one pot!. Brett and I had worked together on the Gold Coast and hadn’t seen each other for about 8 years, which is when he moved to WA, so there was lots of catching up to do, many wines to drink and tall stories to tell.

Selfie after many wines!

While Brett was working I took the opportunity to visit Wilma at Dampier and see the local sights. Red Dog is a Dampier/Pilbara icon so had to have my picture taken with him at the information bay on the way into town! If you haven’t seen this movie, do yourself a favour and watch it!

It was also my chance to photograph the Sturts Desert Pea flower that grows wild on the roadside.

Dampier is a busy port with ships lined up to take on their loads. Apart from iron ore it is also famous for Dampier Salt. 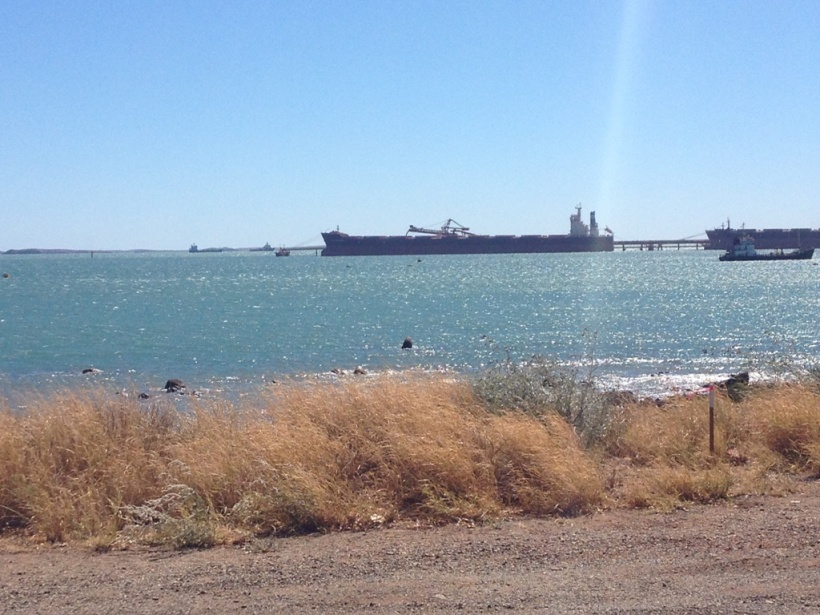 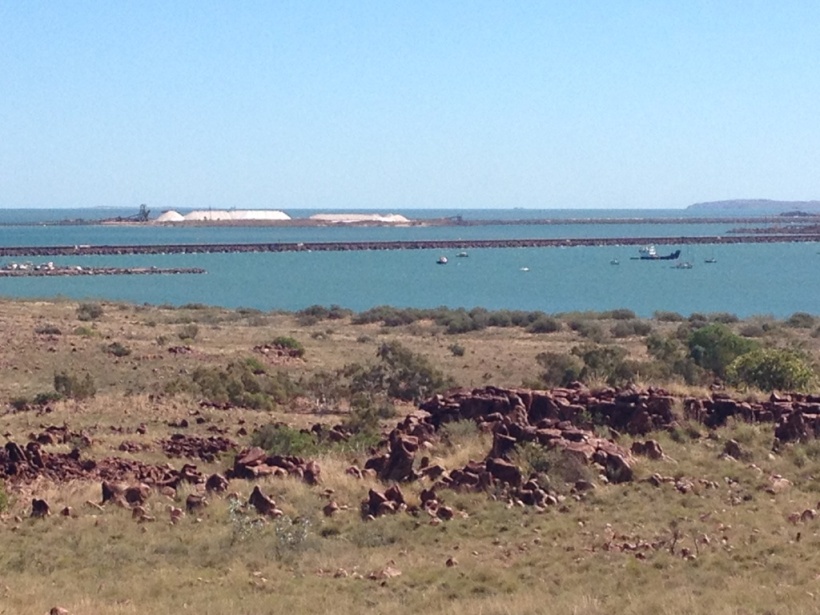 I was lucky to catch up with Richard when he arrived for the weekend so we went off to the annual Chilli Festival at Port Samson and had a good look around that area, too, before heading to the pub to watch the first game of the Bledisloe Cup on the big screen with Brett and Paula.

On the Monday, Wilma and I had booked a trip with a local guide to visit the Burrup Peninsula. Clint took us to Aboriginal Rock Art at Deep Gorge that is dated up to 30,000 years old. It stopped about 100 years ago when the aboriginal community was wiped out in a massacre.

Most of us are familiar with the Dreamtime, or Dreaming, of Aboriginal history but the aborigines of this area don’t refer to it this way, they have a word that means ‘when the earth was soft’, meaning before the spirits decided where the rocks, the land, the rivers and the sea would be formed. Clint was a fabulous guide, raised traditionally in the area, and a fountain of knowledge about his people’s local historyand the importance of different landmarks in the area. He is also a great story teller, which is how the aboriginals pass on their story from generation to generation, so with people like Clint around, hopefully this story will not be lost.

Clint our aboriginal guide on the Burrup 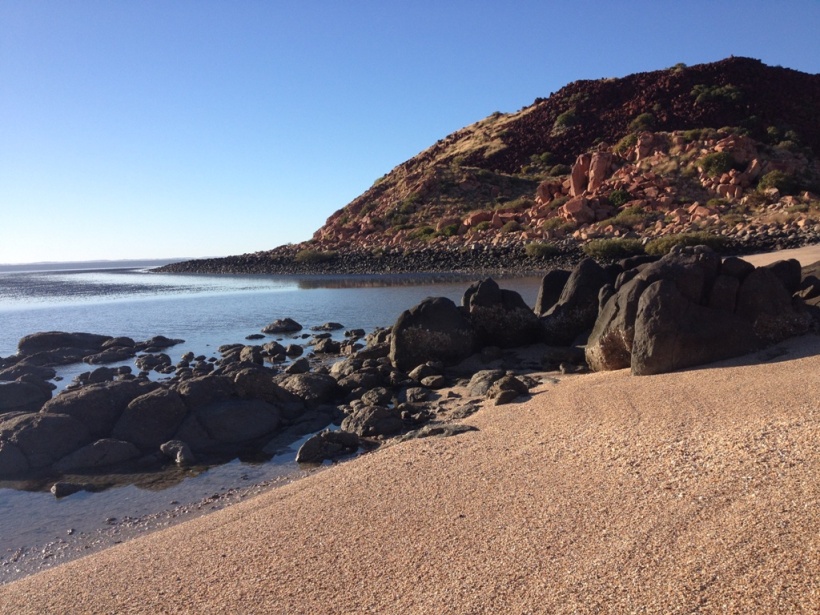 Hearsons Cove, where our tour began

The rock art is not rock painting, but the images are made by removing the outer surface of the rock by techniques including pounding, abrading and scoring. They are called petroglyphs and there estimated to be between 500,000 and 1 million petroglyphs in the Burrup Peninsula area, with approximately 10,000 at the Deep Gorge site. It’s hard to comprehend the age and amount of this amazing legacy which is unparalleled in the world. 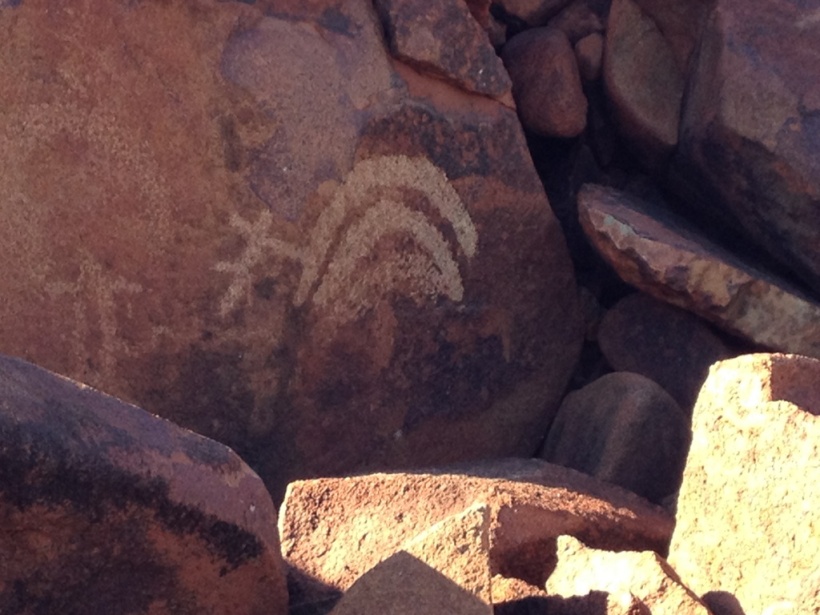 Many of the images needed some serious rock climbing to access and view, but if you’re interested in seeing more just google Burrup Peninsula and there are heaps of images available on the web. One fact that did amaze me, though, is apparently there are a number of images of a Thylacene (Tasmanian Tiger) in this area.

Before I could leave Karratha I had to give Brutus some attention as his engine was missing badly. Wilma headed off to Millstream Chichester National Park and the next day, and $180 later – and all that bought was a new spark plug lead – I went off to meet her. They talk about the Pilbara Premium, and there’s a perfect example!

I’m finally on my way to Karajini National Park, after hearing so much about it from so many people.

2 thoughts on “Catching up in Karratha”