By a quirk of fate I found myself at Fairbridge Festival, about 30 minutes from Perth, for the Anzac Day weekend and camped amongst the volunteers and stall holders. I knew nothing about this festival when I arrived but I can tell you it’s massive! The program runs to 42 pages and there are non-stop acts all day and well into the early hours of the next day.

I came in on the Thursday and managed to get a great camp site but you should see it now – it is packed out. I hope there’s no fire or other emergency because there’s no way I will ever get my van out – I’m hemmed in by tents and cars. 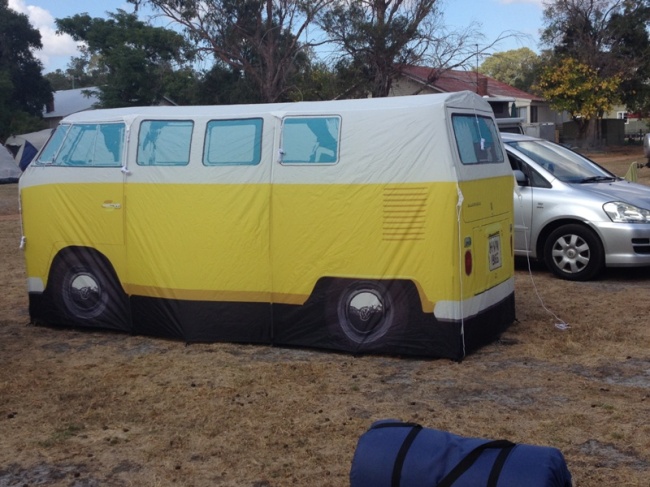 My neighbour, Ricki, had this amazing Kombi van tent

Fairbridge, the village, has an interesting history. It was the vision of a man called Kingsley Fairbridge who visited England from Africa in 1903 and was ‘distressed by the streets full of poor children, grubby and exhausted from lack of fresh air and food…..workhouses filled with children, orphanages bursting at the seams and the overall waste of young lives not able to reach their potential’. Kingsley and his wife Ruby arrived in Pinjarra, Western Australia in 1912 to establish the world’s first Fairbridge Farm School. The aim was ‘to provide children with a sense of self worth and the training and skills necessary for their future in the sparsely populated rural areas of Australia’. Unfortunately, there were also some bad times experienced by many of the children taken to Fairbridge and they are now recognised as part of the ‘stolen generation’, bought here believing they had no families when in fact there were siblings and in some cases parents still living in England. 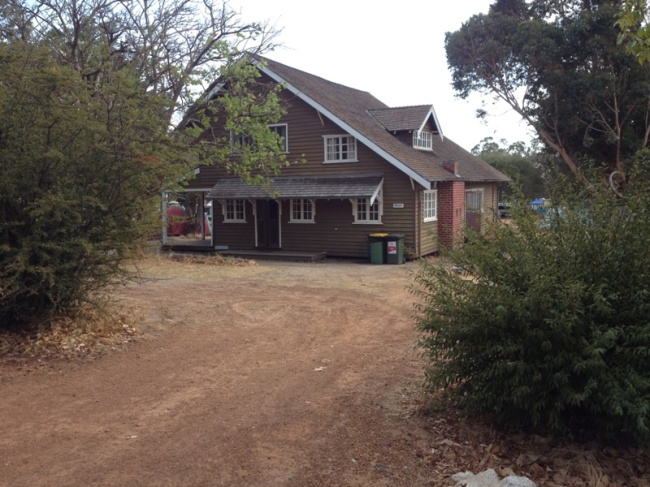 There are a lot of the original buildings here and the whole village is heritage listed. There are over 60 buildings across 30 hectares and today Fairbridge, which is a major youth charitable organisation, provides a base for traineeships, apprenticeships and specialised programs for young people at risk, young people with a disability, Indigenous young people and many more. If you are interested you can find out more about it at www.fairbridge.asn.au .

But more about the Festival. Getting right into the mood I had a tattoo (temporary, of course) on my arm. Unfortunately, because my arm is a bit old and wrinkly, it only looks good if I walk around with it held out straight in front of me which looks a bit weird. I also had a feather extension in my hair – well, when in Rome…. 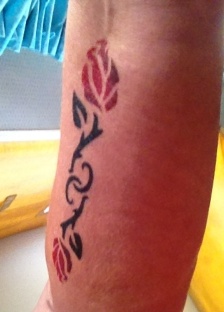 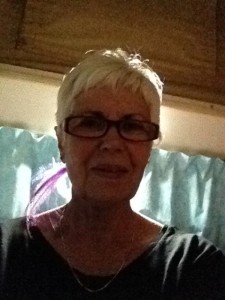 The atmosphere was amazing. So many people all there for fun, friendship and great music. It was very family friendly with creative activities for children of all ages and I loved seeing the little kids busking. One family of little boys had raised enough to buy a ukulele and they were so proud of themselves.

There was a poet’s breakfast on both the Saturday and Sunday mornings that I attended. It was run by a group called Dingoes Breakfast and I couldn’t help myself, I had to recite a couple of my poems. It’s made me realise that I need to learn a few more of them off by heart as I’m sick of saying the same two all the time.

I loved the quirkiness of this group of wandering minstrels called Le Chant Des Pavillons. Their little write up says ‘the instruments …..are the delightfully weird offspring of a marriage between strings and horns.’ 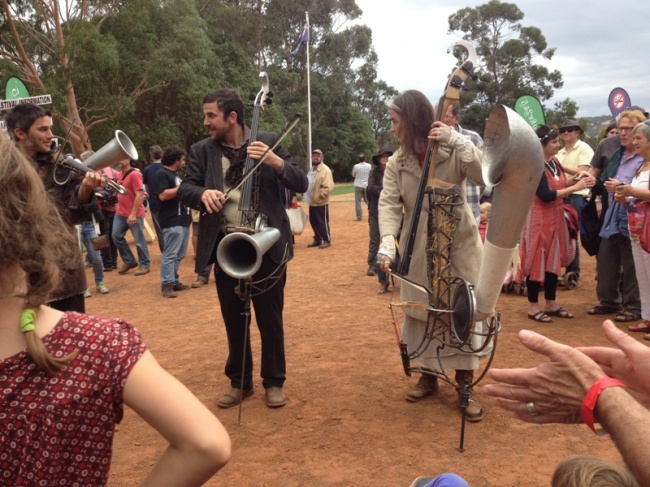 It was impossible to see everyone but I did my best, wandering between venues to catch as much as I could of as many performers as possible, from the Mucky Duck Bush Band to the beautiful voice of Irish Eleanor McEvoy and the wonderful indigenous Gina Williams who sang in her language after telling us the story of the song in words that we could understand, Himmerland (from Denmark), the joyful Perch Creek Jug Band from Victoria ……and more, more, more! If you want to check out who was performing hop onto this website which will give you heaps more info about the Fairbridge Festival.

In between rushing off to venues I volunteered in the Festival Shop and did a 3 hour stint on Saturday night and backed up again for the changeover around lunchtime Sunday. I really enjoyed doing this and met a lot more people this way than just wandering around alone.

A nice surprise was when Jose, who I had travelled with in Tasmania, turned up unexpectedly on Saturday and we saw a few groups together before she left again Sunday morning to head off to Queensland for a Harley Davidson rally in Cairns. 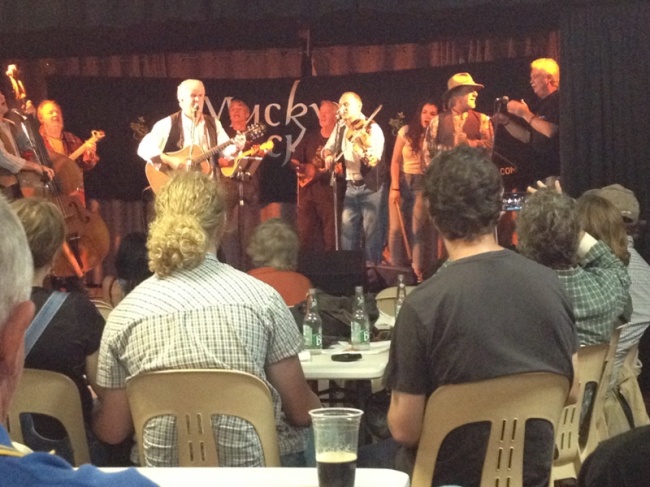 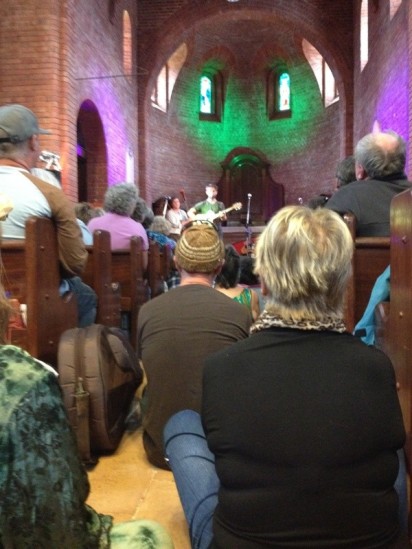 I left Fairbridge on Monday, in the teeming rain, covered in mud, my annexe and me soaked through, and headed to Herron Point, about 60kms south of my house sit in Secret Harbour. I was lucky enough to be able to dry out here and also lay out my annexe under a shelter to dry out too.

I won’t be arriving looking quite as bad as I thought!