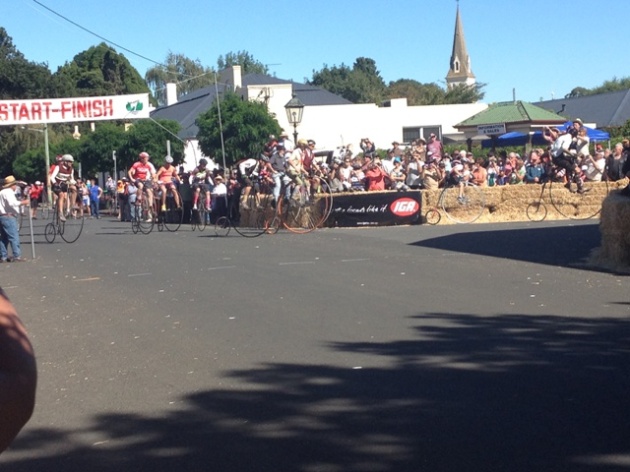 The Tassie Shearwater’s, a Chapter of the CMCA (Campervan & Motorhome Club of Australia), had organised a camping area in the grounds of a local church and it was a great location to just stroll down the street where all the action was happening to join in the festivities. This map shows my route from the time I left Marion’s in Lake Leake, stopped off in Evandale and then headed towards the ferry home to the big island that departed from Devonport on Sunday night.

Evandale is an historic town and the perfect setting for an event such as racing Penny Farthing bikes. “Evandale today is a National Trust classified Georgian village, popular with tourists for its unspoiled heritage buildings …..” You can read more about Evandale here , find out a brief history here, and find loads of photos here.

The locals got into the old fashioned mood for the weekend dressing in period costume, as did many of the bike riders.

The Evandale markets were an added attraction and for the first time since I was a little kid I saw an old-fashioned Punch & Judy Show.

There were also vintage cars and a steam tractor, Morris Dancers and a street parade. 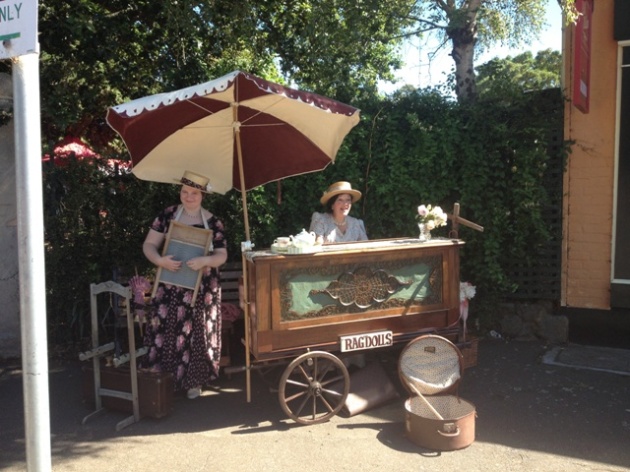 The Church whose grounds we stayed in was an amazing structure with Doric columns.

There were about a dozen vans on site so of course Happy Hour was a great time to catch up with everyone and share the day’s experiences.

At Saturday’s happy hour we held a mock wedding for an engaged couple in our midst and decided we would all eat together that night in the hall that was provided for us. This meal became the ‘wedding breakfast’, which was a lot of fun. Unfortunately for the ‘bride’, she did most of the food preparation – and did an amazing job!

As Sunday dawned I realised that this was my farewell day in Tasmania, so van packed, I headed off to Devonport to catch the Spirit of Tasmania that night. I had spent nearly 3 months in Tasmania and I still have so much to see there that returning is not an option, it’s a must!

2 thoughts on “Flashback to February”