After seeing the Cobb & Co Museum in Toowoomba the lady at the Information Centre suggested I go to the Jondaryan Woolshed. What a great experience! It’s only about a 40 minute drive to Jondaryan, west of Toowoomba on the road to Dalby.

As I didn’t arrive until about 2.30 I had missed the tours for the day so decided to stay the night in their camping ground and pick up the 10.30am tour the next day. The camping ground was fantastic. I shouted myself a powered site for $22.00 and booked in to the tour ($11.50 concession price). After getting over the angst of not being asked for my pension card to prove I was that old I made my way to the camping ground. There were only about half a dozen vans there but they also had cottages and rooms in what used to be the Shearer’s Quarters.

The facilities were very modern and very clean.

There was also a big camp kitchen that anyone could use and a big open fire pit which a few people congregated at.

It was a chilly night so I dragged out the trakkie and settled in with my book and I was warm as toast.

I had plenty of time before the tour the next day so caught up on some washing. There were washing machines and dryers there for $3 a load each.It was like playing the pokies – you win some and you lose some. I won with the washing machine but I lost my money in the dryer as it just wouldn’t work for me so strung my clothes around the van and they soon dried. 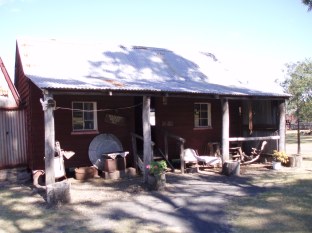 There are a lot of old buildings on the site that have come from other areas of the Jondaryan Station and they have been set up with items of historical value. There was an old school, blacksmith’s shop, schoolmaster’s house, dining hall, drover’s hut and of course the shearing shed. All these buildings are original and if they have been moved to the site they have been re-built with all the original materials and exactly how they used to be. This picture is of a Drover’s Hut but it was pretty flash as it had a timber floor and most were just earth!

The history of Jondaryan is really interesting and it once covered 300,000 acres. They ran 260,000 sheep and famous shearer Jackie Howe used to shear there. In October I think it is they have a Jackie Howe Festival and shearers come from all around for a shearing competition.

The shearing shed is the original shed and it’s iron roof was pre-drilled and sent to Jondaryan to be fixed to the roof.

At one stage there were 52 shearers working in the shed but they only have 18 shearing stations now and half the wool shed is used for functions such as weddings – they have 43 booked in for the rest of this year. This excerpt is from The Jondaryan Woolshed web page

” Dating from 1859 this magnificent building stands as a monument to Jondaryan station and the pioneers of the Darling Downs. In its heyday Jondaryan covered 300,000 thousand acres and the woolshed itself was the jewel in the crown of what was one of the most prestigious sheep stations on the downs.

The Jondaryan Woolshed is the oldest operating woolshed in Queensland. Woolsheds are used for shearing sheep, and sorting and baling the fleece prior to transportation to market. In Queensland, shearing is undertaken in spring and early summer – September through December. In a climate where it rains in summer, the woolshed is necessary to keep the shearers and sheep dry for efficient processing.

During its heyday the 300-feet-long Jondaryan Woolshed held 52 blade shearing stands and employed numerous other workers processing sheep. These days the shed swings into action for demonstrations and special events.”

The floors are made of some sort of apple wood as it doesn’t splinter.  The panels you can see going in the opposite direction to the main floor actually lift up and the kids had to get down under the floor and shovel the manure out of the way. You can imagine how much sheep poo there would be if 52 shearers were shearing about 200 sheep a day!

One of the owners of Jondaryan was a man ahead of his time and set up schools every 10 miles to educate the children of the workers. I loved the Rules for Teachers on the wall of the school house. It was the teacher’s job to bring a bucket of water and a scuttle of coal to the school each day, each week they had to wash out the schoolhouse, the men were allowed to go out one night a week to go courting or 2 nights if they were going to church. Swearing or drinking was instant dismissal. Imagine that today!

The photo here is  a similar set of rules that I photographed at the Cobb & Co Museum in Toowoomba, although I don’t think they are quite so severe. I love the cause for instant dismissal – “Marriage or other unseemly behaviour by women teachers.”

Reminds me that when I got married in 1969 a woman had to resign from the Superannuation Fund. There must be a whole lot of women my age totally disadvantaged by such a ruling!

The best part of the tour though was to see a sheep shorn and to see the working dogs round up a small herd of sheep into a pen. 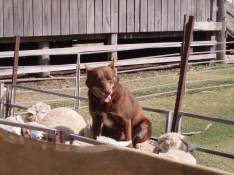 I was amazed at how big the fleece was that came off the merino that was shorn today.

That sheep was about 10 months old and it was the first time it had been shorn. Rather than buck and squeal about the ordeal it seemed quite comfortable and the shearer told us it is all to do with the way they are handled so that they are not in any discomfort.

The breeding has been such that in its early days they would get about 2lb of wool off each sheep and today they get about 16lb – that’s a massive increase. So where it used to take 2000 sheep to make a 4000lb bale today it only takes 250! This has led to diversification on large sheep properties and they have branched into grazing and crops.

If you have the opportunity I highly recommend the Jondaryan Woolshed as a great experience and fantastic place to camp.