Merry Christmas from chilly Tasmania. I wish you happy celebrations over the Festive Season and good health, happiness and enough wealth to have lots of exciting adventures in 2014.

My trip over on the Spirit of Tasmania was pretty good even though I had only booked a recliner for the night. I was right in the front seat looking out over the water and then had these lovely young backpackers sitting next to me, who I discovered were French when the one next to me talked in his sleep in this beautiful French accent. Wish I’d studied harder at school so I knew what he was saying!

Leaving Melbourne on the Spirit of Tasmania.

Another passenger, Michael, had an old Kombi and we exchanged details, promising to catch up on our travels. He called in a few days later and we arranged to meet at Mayfield Bay, which was to be my first trip since arriving.

Tasmania greeted me with a hailstorm and I don’t think I’ve felt warm since.

I am definitely not a cold weather person and find the constant chill, grey skies and drizzly rain depressing. Thank goodness Marion’s home is lovely and warm or I would have headed north again for some sunshine.

Within a week of me arriving Marion and I packed up our vans and headed down to Mayfield Bay. This map shows the round trip that took us there and then back to Marion’s a couple of days later. 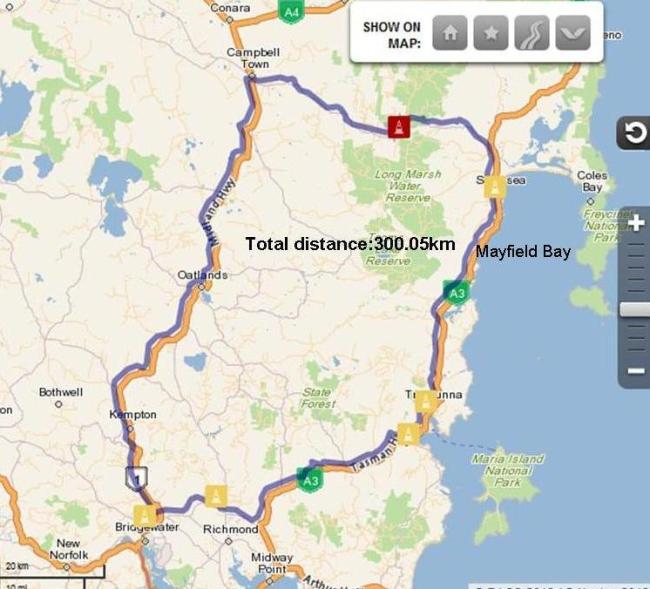 There is an amazing old convict built bridge called Spiky Bridge on the way. Heritage Tasmania gives the following information about the history of the bridge.

“It took the cunning and ingenuity of an Irishman to ensure that a notoriously difficult road on Tasmania’s east coast was improved.
Edward Shaw was a friend of Major de Gillern, then superintendent of the Rocky Hills Probation station.
Tired of his requests to improve the road traversing the steep gully south of Waterloo Point, some 7.5 kilometres south of Swansea, Edward took matters into his own hands.
One night while driving the Major home he took the gully at full gallop making the journey somewhat uncomfortable for the Major. In no time a convict gang was assigned to build a bridge across the sharp dip.
The jagged rocks used to ornament the bridge provided the bridge’s name.
Built in 1843, it has been claimed that the spikes were designed to prevent cattle falling over the sides.” 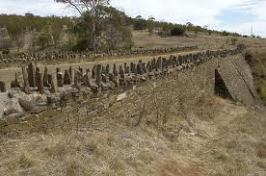 When we got there Michael had already set up camp and we were able to park nearby. Jack (the dog) was ready for a walk so off we all went to the beach.

As we walked towards the rocks we saw this amazing old bridge that had been built by convict labour in Tasmania’s early history.

“…….there was a probation station at Rocky Hills, about 10 Km south of Swansea. 300 convicts lived here. They built many of the roads along the east coast area. Many of the Rocky Hills buildings are still there, the officer’s quarters now serving as a farm house and the store as a barn. They are visible from the Tasman Highway.

Convicts from Rocky Hills built the Tasman Highway. At Mayfield Beach at the bottom of the previously mentioned hill is Old Man Creek. Pull into the camping area, then follow the track down above the beach till you reach the creek – about 150 metres. There’s an information board showing the way and telling you about the bridge. This one has 3 arches. You’ll see the original convict road, with another road on top and finally the present road on top of that. There are many other such bridges, but this one is the easiest to see.”

We had a pleasant couple of days at Mayfield Bay, enjoyed a lovely meal with Michael the night we arrived, celebrated our first Tassie adventure with champagne….and then….the weather deteriorated! We packed up and left our camping spots to the Christmas campers who were setting up for their holidays and did a round trip back to Marion’s cosy fireplace where we huddled for the next few days.

My next trip was to Bicheno for a haircut – OMG it’s short! Thank goodness it grows quickly as the hairdresser went crazy! 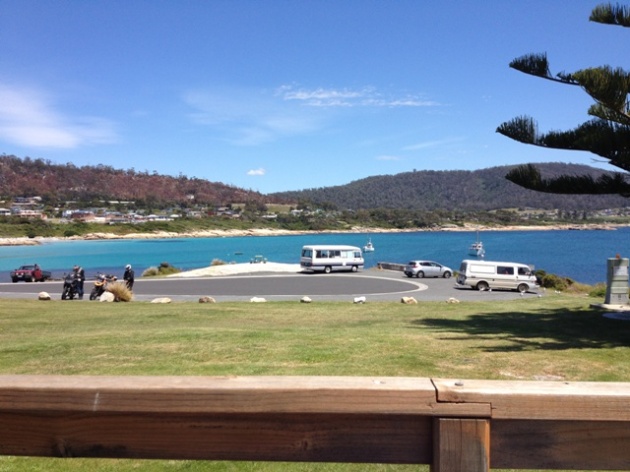 I thought Bicheno was lovely, but that might have been partly because the sun was finally shining. Amazing how it changes my mood. I left there and took myself on a drive to Coles Bay on the Freycinet Peninsula

and then decided to camp overnight at Friendly Beaches, where I had spent my very first night in Brutus. On the way there I stopped at the Freycinet Oyster Farm and lashed out on a dozen oysters for lunch. Yum!

As I didn’t have a National Park Pass I did the right thing and bought a 24 hour pass for $24 – I won’t be doing that again! When I left there the next day I went on another tourist drive to 9 Mile Beach and right to the end, Bagot Point, where there is free camping right on the beach.

I then met Marion in Swansea where we were attending a Christmas Party that night at the Bark Mill Tavern. It was a great night. The local choir performed and then the ukulele group, the food was good, the drinks flowed, there was lots of laughter – and best of all we were able to stay the night in the car park at the tavern, so we didn’t have to drive anywhere. 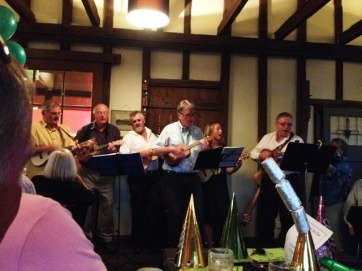 Marion and I then headed back north to Lagoons Beach –  to stay for as long as we felt like.I’m looking forward to setting up camp and not going anywhere for a few days. 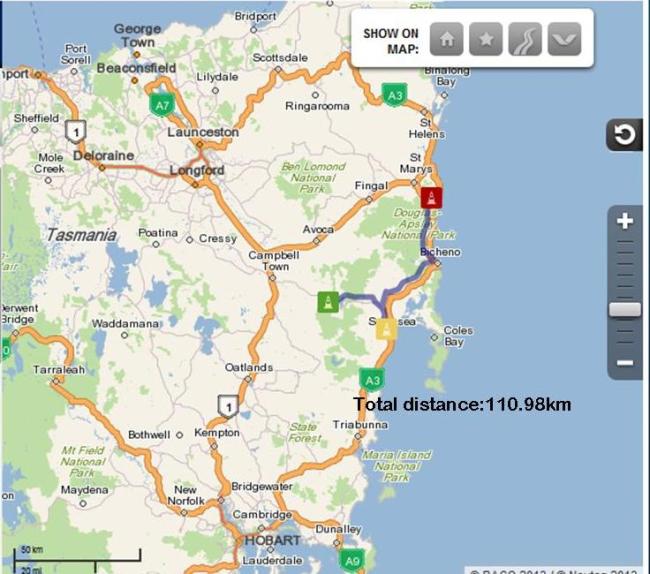 On the way there is a lookout over Moulting Lagoons.

Moulting Lagoon Game Reserve is a large, internationally recognised wetland at the northern end of Great Oyster Bay on the east coast of Tasmania. It is an important breeding ground for various waterfowl and wetland birds, and also a destination for migratory birds. As such, it is an excellent place for bird-watching, although due to the sheer size of the lagoon, some species may be difficult to spot. It also contains rare and significant wetland flora and fauna, as well as being an area of extraordinary beauty. The name Moulting Lagoon comes from black swans shedding their flight feathers. These can often be seen piled up along the shoreline.

In addition to its natural significance, the lagoon is important for cultural values, such as its importance to the Aboriginal community, and its continuing use by the local community for a variety of recreational and commercial activities, including duck hunting. 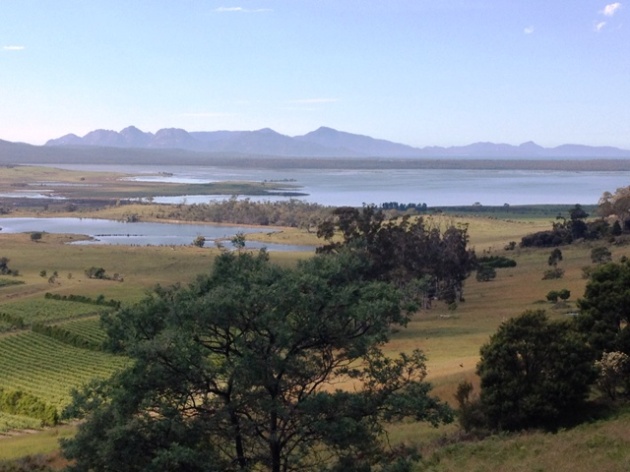 What a magic spot Lagoons Beach is! It reminded us of when we were kids and mum and dad took us camping to Balnarring Beach on the Mornington Peninsula. There were plenty of campsites and they were nicely separated with trees and bush so you didn’t feel like you were intruding on anyone else’s space. Jack loved it as there were lots of sticks, and a beautiful beach to run on. We had a couple of warm, sunny days there.

Then the Tassie weather struck again! The morning mist became an afternoon drizzle and then an overnight downpour so the next day we packed up our wet gear and headed back to the cosy fire again. I’d only gone about 100 metres when old Brutus started to misbehave so I quickly pulled over and discovered I had a flat tyre. Damn, the spare was back at Marion’s as I hadn’t had the mounting bracket made for it yet. A quick call to Brian, who had arrived from his farm at Cudal to do some trout fishing, and he collected it and brought it up for me. Then I had to get the RACT to put it on because we couldn’t get the wheel nuts undone. Now I know I need a different wheel brace so that goes on my shopping list!

Tomorrow is Christmas Day and we will be celebrating with some of Marion’s neighbours. The trifle is made, the oysters have been collected, the ham is waiting to be glazed and the presents are wrapped. There’s vodka for the Bloody Mary’s to start the day and the champagne is on the ice for later on. Sounds perfect.

I hope you all enjoy a perfect Christmas Day, too, wherever you are. Be safe, be happy, have fun, share lots of hugs – and look forward, as I am, to more adventures in 2014.