Did I have a choice to get involved? I don’t think so! The people I met picked me up and carried me along to all the places they volunteer. And it was the best thing I could have done.

I have now been house-sitting for about 7 weeks and my time in Mt Isa is drawing to a close. Paul and Shirley, who I have been house-sitting sit for, arrived home yesterday and it is time for me to plan my route back to the Gold Coast. I will be leaving Mt Isa much richer for the experiences I have enjoyed here thanks to Shirley’s wonderful friends Joy and Bev and the people they have introduced me to. Before I share some of my trips with you though, I must share some photos of the house I have been looking after, it’s garden and visitors.

Shirley has some beautiful fragrant roses out the front that have been in bloom. 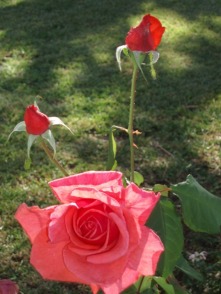 In the big bush at the front gate there is a family of Western Bowerbirds. Until I looked them up I thought someone had daubed them with bright pink paint. They are like massive overgrown sparrows in colour except for this clump of bright pink feathers behind their head.

And there are regularly fork-tailed (black) kites circling the back yard, eyeing off next doors chickens I think.

To start at the beginning you might remember that I didn’t see much of Cloncurry on my way here so Joy and Bev took me back there and showed me some of their sights along the way.

Mt Frosty is an old limestone mine and I would never have seen it without local knowledge. Some of the remains of the old mine reminded me of scenes out of Mad Max 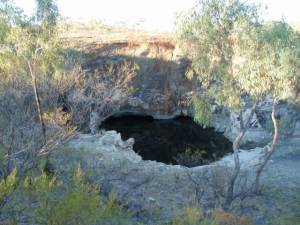 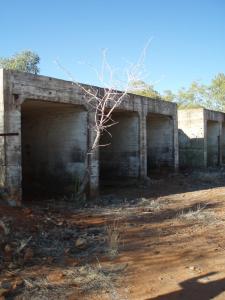 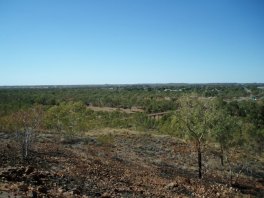 Once in Cloncurry we visited the John Flynn Museum. The Rev John Flynn was the founder of the Royal Flying Doctor Service, which was established in 1928. 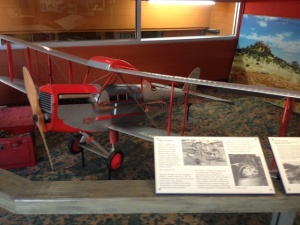 I loved the carpet which had been specially made to represent the landscape from the air, but honestly, you can look at the hills sometimes and they look exactly the same as the pattern on the carpet.

We also visited the Cloncurry Cemetry which had many historical graves, including that of Dame Mary Gilmore who features on our $10 note.  Click here to find out more about Dame Mary Gilmore and her contribution to Australian Literature and History. There was also a separate section in the cemetery for Afghans, who made up a large part of the early settlers in the area.

Before we left Cloncurry we had to go out to the airport where the original QANTAS hangar is situated. 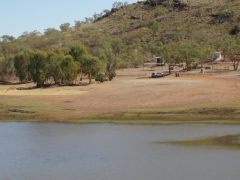 We also had a detour into the abandoned township of Mary Kathleen, once a thriving community established to mine uranium, which as a matter of interest was found by my house-sit’s Uncle,  Norm Mc Conachy and named after his wife. 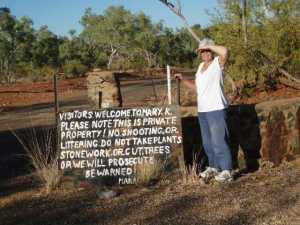 The old township of Mary K is a fantastic free camp site with room for hundreds of vans and is well signed and easily accessible off the Barkly Highway. There are established trees, roadways and if you want a level surface there are still concrete house pads there to park on. You would need to be self contained as there are no facilities. Sure beats the heck out of staying roadside at Fountain Springs though, which is only a few km’s closer to Cloncurry and is very busy, but does have toilets and shady tables to sit at. We stopped for a picnic at Fountain Springs on our way to Cloncurry and this is a photo of Bev and Joy, the two wonderful ladies who ‘adopted’ me in Mt Isa.

I wrote a poem about Bev, who is a real character, and read it at the Bush Poet’s Breakfast held by the Zonta club as part of the Mt Isa Rodeo week festivities. For my efforts I was presented with a lovely little clock. Here’s my poem, called The Sheila from Mt Isa. I must say there were a few gasps of recognition from the audience, but Bev was with me and it’s got her tick of approval so that’s ok!

The Sheila from Mt Isa

I met a bloke the other day, this Isa sheila, Bev

She swaggered like a fella her bush hat upon her head

Her jeans hung low upon her hips beneath her ample girth

You’d find no-one else more dinkum if you travelled all the earth.

She volunteers at cub scouts and she works at Isa mine.

She’s in the stores she tells me and she reckons it’s all fine.

She takes no cheek from anyone but is quick to give some lip,

And if she’s walking through the Isa I’m giving you the tip.

Sing out g’day and give a wave and say, “Is your name Bev?”

You’ll recognise her straight away from the bush hat on her head.

She’ll give you the time of day, OK, and stop and have a talk.

When you travel round this country, no matter how you go,

The sheila from Mt Isa, her bush hat upon her head.