What a wonderful experience living in Mt Isa has been! I have seen and done so much in the nearly 8 weeks I have been here and met some great people who became firm friends in such a short time. They opened up their hearts to me and included me in their lives – and that’s what made the Isa so special.

I have told you already about a lot of things I have been involved in but there’s a couple that you don’t know about yet so let me fill you in – or in the words of the late Peter Allen “I’ve got so much to tell you!”

The Mt Isa Rodeo was on the week before I left and yep, I got roped in to some volunteer work for the Lions – this time serving hot chips from their chip van at The Mailman Express. This is a horse race where the horses race against the clock over 200 metres rather than against other horses. A young woman from Bundaberg, Katie Vaughan, won on her quarter horse, Black Magic.There was a great crowd there and we sold 700 cups of hot chips that night. I never want to see hot chips again! They held a Calcutta and auctioned off the horses, a couple of them selling for about $2,500, and one of those was the winner in 11 point something seconds. To qualify the horses can’t be thoroughbreds. The race is named in honour of a local racing identity Wally Mailman, who is also the father of actress Deborah Mailman. This photo was taken early in the evening before the crowd arrived.

Dave setting up the chip van.

That morning was an early start as the Zonta Club held a bush poet’s breakfast that I attended and I was asked to read a couple of my poems – the one about the green frog in the toilet and one I had written about Bev, the sheila from Mt Isa. (They have been included in previous blog posts).There were a few gasps when I started reading the one about Bev as people recognised who I was talking about but I was there with Bev and she loves the poem so that was ok. At the end of the recitals everyone who took part was presented with a little clock as a memento and thank you for participating.

The weekend the rodeo was on the Variety Club Bash hit town, and you guessed it, I was volunteered again! This time it was with Meals on Wheels who had won the tender to feed the Bash participants. During the week I helped make about 30kgs of savoury mince for them and then helped serving up dinner on the Friday night and then breakfast on Sunday morning. The Bash crews were all dressed up to match the way they had decorated their cars and trucks so we had the Beverley Hillbillies, pink fairies, clowns, policemen, firemen, lawn bowlers and even Dame Edna Everage! 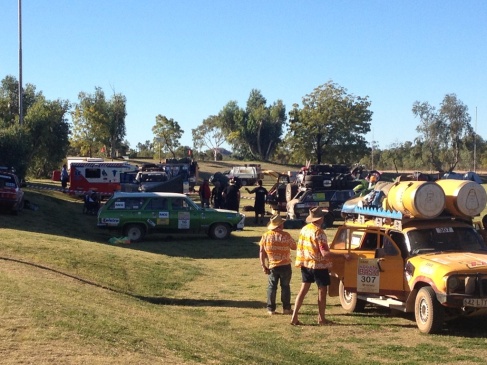 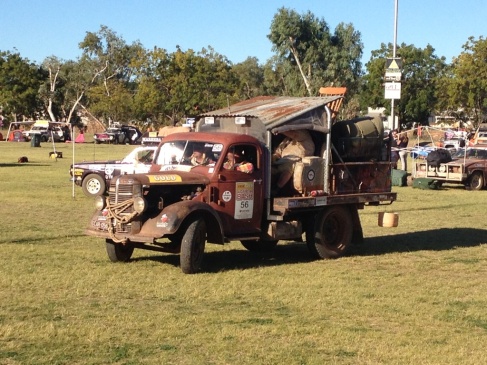 They were great fun and played their parts really well, keeping in character most of the time. A lot of them went to the rodeo on the Saturday night so there were a few sore heads at breakfast on Sunday morning after which they took off on their next leg to Normanton.

I’ve been to my first rodeo!

Paul and Shirley, owners of the house I have been looking after, arrived home the following week so my time in Mt Isa was coming to an end. I was farewelled in spectacular fashion with a sunset barra barbie at Lake Moondarra.Dave organised it, mainly as a thank you for his little team of volunteers that went to Avon Downs but it was my last night so it was a lovely way to leave. In the back row there’s Kerry, me and Dave’s wife, Toni. Joy and Dave are sitting in the front. 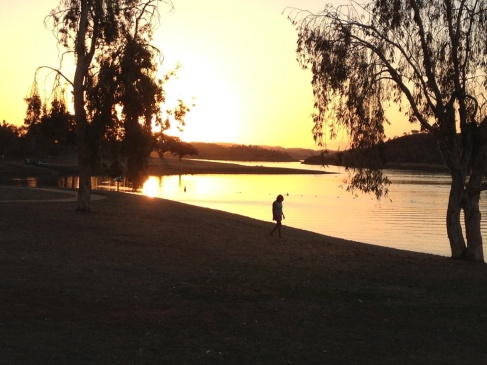 As a tribute to the friendship Joy offered me when I first arrived, and in recognition of all the amazing experiences that she roped me in to, I wrote the following poem. I still can’t read the last couple of lines without getting a little teary…..

When I was in Mt Isa I met this friend of Shirl’s.

Her name was Joy and she welcomed me so I felt like one of the girls.

Joy volunteers at Meals on Wheels and the Flying Doctor Service

But when it comes to driving she gets a little nervous.

We stopped at Driver Reviver – we weren’t in any hurry.

And she’d planned the sights that we would see when we set off on our way.

That had made its home at Fountain Springs, a favourite roadside rest.

Another trip she took me on was out to Avon Downs.

It was the annual coppers cricket match and they turned out to be clowns.

They were dressed in crazy costumes, and Spiderman was there

It didn’t seem to matter what they chose to wear.

And raise funds for the Flying Doctors and enjoy the outback cheer.

Then she roped me in to sell hot chips for the Lions Club, no less!

It was at a special horse race called the Mailman Express.

And when the Variety Club Bash hit town they needed to be fed,

And dished up dinner Friday night and breakfast Sunday morning.

They’ll keep you so damn busy you won’t have time to misbehave.

And, like me, you will be sorry when your time in Isa’s done.