Myall Creek and Myall Creek Station is about 10 kilometres out of Bingara towards Inverell. The Myall Creek Massacre occurred on the 10th June 1838, when 28 Aboriginal men, women and children were slaughtered by a gang of 10 white people.

What makes it stand out in history is that it was the first time that white people were punished for murdering black people.

So much has been written about the Myall Creek Massacre that I really can’t add anything to what is readily available on the net. It’s interesting to read reports from both the Indigenous and European perspectives. This cartoon was featured on a site called Creative Spirits with the caption 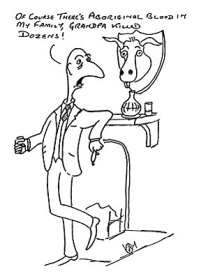 Aboriginal killings ‘run in the family’. The cartoon reflects that many colonists saw shooting Aboriginal people as a sport [15]. It also plays with the fact that many people see having some Aboriginal ancestry as ‘fashionable’. Graphic: Ian Sutherland

[The Myall Creek massacre Supreme court trials were] the first place white man’s justice done some good. Right across Australia, there were massacres. What makes Myall Creek real is that people were hanged, see. That was the difference.

This site of the National Museum Australia also provides details of the court case – there were two due to some of the white settlers  intimidating theoriginal jurors into staying away from the court. Eventually a jury was formed and 7 men were found guilty and sentenced to public execution. The following are quotes from the NMA page.

The colonial community of New South Wales was more outraged by the execution of British citizens than they were by the massacre of the Wirrayaraay people.

The executions of British subjects for the murder of the Wirrayaraay people hardened colonial attitudes towards the First Peoples of Australia and shaped later behaviours on the Frontier.

In Australian English, the word ‘dispersal’ became the commonplace euphemism used to refer to the killing and massacre of Aboriginal peoples, which went on to take more insidious and devious forms: disease, starvation and the poisoning of food rations are just some of the ways that the Indigenous population was further decimated.

In 2000 a memorial site was opened on Myall Creek, set up by both indignous and non-indignous people. It is a memorial not just to this local massacre but to all massacres around Australia. The Bingara website lists the words on the 8 memorial plaques that are placed at the memorial.

Every year on the Sunday of the June long weekend, hundreds of people, both Indigenous and non-Indigenous, gather at the site to attend an annual memorial service. Descendants of the victims and survivors, such as Aunty Sue Blacklock, Aunty Elizabeth Connors and Uncle Lyall Munro, as well as descendants of the perpetrators of the massacre, such as Beulah Adams and Des Blake, come together to remember and reflect on past atrocities, as well as to express shared aims for the future.

Gamilaraay Elder Sue Blacklock, one of the founders of the memorial site and service, talked about what the annual service and the reconciliation process means to her in a 2013 SBS interview:

When I spoke to  local Bingara people about some of the topics I was going to blog about they were upset that this dark part of their history was included. I get the feeling that when people write about Bingara, the Myall Creek Massacre features high on the agenda and I hope I’ve been able to show you, through my other blog topics, there is a lot more to this friendly town than this historical blot on their landscape.