Cervantes is a fishing village about 200kms north of Perth and is famous for its rock lobsters! Unfortunately, I couldn’t afford to eat one, but those that did said they were pretty good. I’m glad I didn’t have any because I notice that the rock lobster season is due to begin, so I’m hanging out for a fresh one!!

I was interested to find out how Cervantes got its name and found this fantastic website that gives the history of names in WA. This is what it said about Cervantes

The townsite of Cervantes, a fishing settlement on the west coast near Jurien Bay and Nambung National Park, was gazetted in 1963. It is named after nearby Cervantes Islands, which in turn are named after the “Cervantes”, an American whaler, wrecked just north of the islands on the 20th July 1844. The “Cervantes” was under the command of Captain Gibson at the time of the shipwreck and the survivors walked about 160 km south along the coast to Fremantle. At the time of naming of the townsite it was thought that the islands had been named “Cervantes” by the Baudin Expedition of 1801-03 after a Spanish author, and, as a result, many of the streets received Spanish names.

This little town, population around 500, grew by about 50% when the West Coast Rally began, and approximately 170 motorhomes of all shapes and sizes turned up – and about 280 people all shapes and sizes turned up too! You can imagine what a boost these sort of gatherings have on the economy of a small town like this – fuel, gas, souvenirs, eating out, tourist trips….. We all put our shopping dockets in a barrel so I’m sure there will be a report at some stage about how much we spent in the town while we were there.

The rally kicked off on Thursday, October 9 and we braved the wind to set up our camps. The Solos were well represented by lots of Willie Wagtails and a few extras, like myself, from other parts of Australia. The theme of the rally was Aliens and UFO’s, so at our dinner on Saturday night we dressed to the theme.

Earlier that day a bus load of us went off to The Pinnacles. 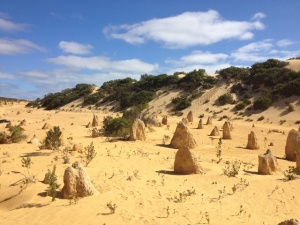 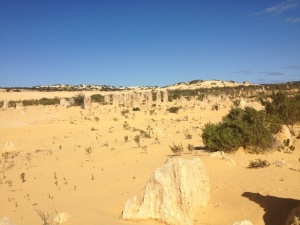 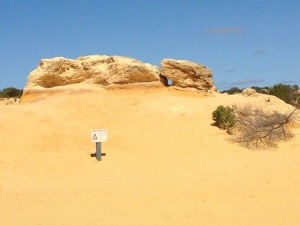 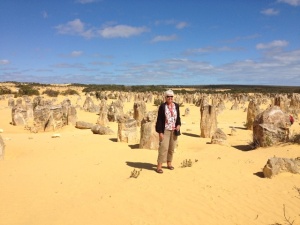 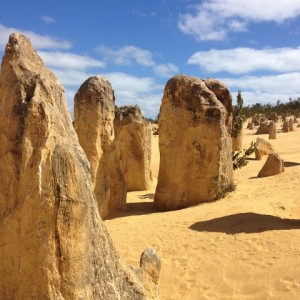 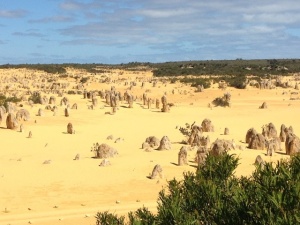 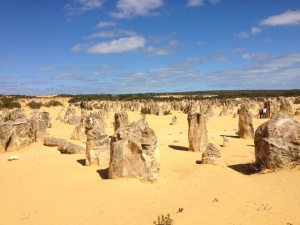 So how did these strange pinnacles form?

A set of unique circumstances produced the pinnacles. Firstly the huge sand dunes stabilised. The rains which fell on the dunes leached down through the sand carrying the calcium. This resulted in the lower levels of the dune solidifying into a soft limestone. As this stabilisation occurred a layer of soil formed on top of the dune which allowed plants to grow and further cemented the limestone below. Gradually the lowest layer of soil, which lay between the surface and the limestone, formed into a hard cap which resulted in the old dunes having three levels – a soil and plant level near the surface, a hard cap below the surface, and a thick layer of soft limestone at the bottom of the dune.

Inevitably the roots from the plants on the top level found cracks and broke up the hard cap and the layer of soft limestone. The result was that under a surface covered with plants and soil the pinnacles developed. No one knows for sure how long ago this process occurred. It may have started as long ago as 500 000 years but equally it may only be a few thousand years old and it may still be continuing today. The Western Australian Museum has opted for some time in the last 80 000 years.

Anyway the advent of drier weather in the region resulted in the top layer of plants and soil being removed and gradually the pinnacles were exposed so that today they stand like strange sentinels on a plain of wind blown sand.

Disc Bowls was a popular activity and championships were held over the weekend, along with a Pet Parade. 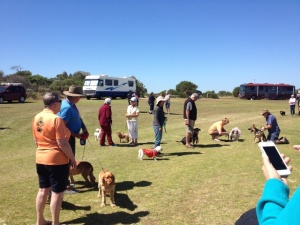 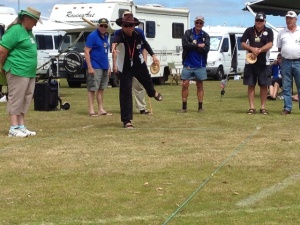 After a few days of fellowship with like minded motorhomers we all went off in our various directions on Tuesday. I headed straight back to Cliff Head, one of my favourite camping spots in this area, and set myself up for a few days R & R.

Oh, I forgot, isn’t that my whole lifestyle now?