One night at the Sapphire free camp was enough as there was a horrible smell in the area – I think they were cleaning out the septic tank! So this site certainly wasn’t a ‘jewel’ in the crown of our travels. But now our little convoy numbered 5 motorhomes as we headed north to Charters Towers. This doesn’t look far on the map but it’s about 520kms!

Our first stop wasn’t far up the road – a good looking cafe at Rubyvale that sold Merlo coffee – my favourite. We parked on the Common, which local live stock have the right to use and today we shared it with a few cows. 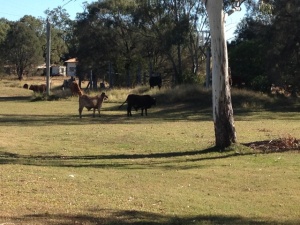 The coffee kept us going for while and our next stop was a very pretty, clean town called Capella.

Like so many outback settlements, the small, Peak Downs town of Capella began as a coachstop on the trails linking mining and agricultural producers with the coast and developed in rhythm with the dictates of the market. These days, Capella’s lifeblood are the black soil graziers and pastoralists and the regional coal fields. The pioneering squattocracy was attracted to the down country by explorer Ludwig Leichhardt’s glowing assessment of the agricultural potential of the grasslands he traversed in 1846.

Pioneer Village on the town’s northern outskirts traces Capella’s role in the fluctuating fortunes of the Peak Range and Peak Downs corner of central Queensland. The village displays include Peak Downs Homestead, a shingle-roofed cottage built in 1869 by artisans using adzed and pit-sawn local timbers.
The town takes its name from the reddish, eighth brightest star in the southern sky, while visitors are also attracted to sparklers of another kind on the gem fields just half an hour out of Capella.

What I found even more interesting though was the role the locals played in the origin of the emu plume in the Light Horseman’s hat. There is a wonderful sculptural display along the main street and I found this little snippet of history when googling about it.

Sir David Fairbairn, grandson of George Fairbairn who now lives in Canberra, believes that the first time Australian troopers wore emu feathers in their slouch hats was at Peak Downs. The story goes that a detachment of Mounted Infantry troopers guarding a gang of

‘non-union’ shearers during the great shearers strike of 1891 rode down to the creek one day when things were quiet and shot an emu. Each took a handful of feathers and placed them in the band of his hat. From then on it became tradition for troopers to wear the emu feathers.

At that time, 1891, officers of the Queensland Mounted Infantry units wore green cock plumes in their felt hats, but the ‘other ranks’ had no plume. By 1894 however, all non-commissioned officers and men of all mounted Queensland units wore the emu plume, and, by 1897 they had replaced the officers’ cock plume.

The Queensland Mounted Troops took great pride in their plumes and seemed to gain great strength of spirit from them during the Boer War (1899 – 1902). Indeed, when Major General Edward Hutton ordered the wearing of helmets in place of the plumed slouch hat, he faced much pressure including that from strongly lobbied Federal Members of Parliament. This led to some individuality being retained when he renamed all mounted Australian troops the Australian Light Horse. The new Queensland based units became the 13th, 14th and 15th Australian Light Horse (Queensland Mounted Infantry). They retained their name and the right to wear the emu plumes as part of their uniform right through Commonwealth Forces uniform revisions up until 1912.

With the outbreak of WW1 (1914 – 1918), Lieutenant Colonel R.M. Stodart, the Commanding Officer of the 2nd Light Horse, campaigned all the way up to Prime Minister Fisher to successfully have the emu plumes reinstated as part of the Queensland Mounted Infantry uniform. He maintained the plumes were essential to the regimental corp spirit. The Queenslanders’ plumes were the envy of all other regiments until 1915, when the non-Queensland 3rd Light Horse Brigade arrived in Egypt wearing them.

The Queenslanders vigorously protested. A conference of Light Horse Brigadiers could not settle the matter so it was referred back to the Australian Government, which eventually ruled that all Light Horse Regiments could wear the plumes, provided there was no expense to the public purse. It can be argued that the emu plumes bolstered all Australian Light Horse corps spirits, as they had the Queensland Mounted Infantry.

The emu plumes are still worn by Armoured Units of the Australian Army today.

It was a very pleasant interlude in Capella and fascinating to read about its role in our Military History.

Clermont was the next main town we headed to, but Richard found a great camping spot by a river on the Gregory Highway, almost opposite the entry to the Blair Athol mine. He bought out his camp oven and we all threw in whatever we had and enjoyed a great meal together. Lawrence left us the next day to meet up with some other friends so we were now a safari of 4 vans.

Richard found our next camp spot too, which was a disused gravel pit north of Belyando Crossing. It was off the road, nice and level and out came the camp oven again. 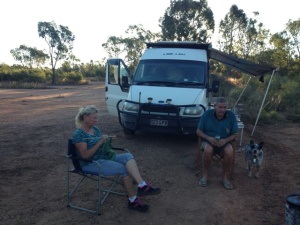 Outside Clermont -Lorrie & Richard with his dog Sheila

Charters Towers was our next stop but on the way Richard peeled off so now it was just Pam, Lorrie and I heading to town to shop! It was great to stock up on some fresh food and water. When we left the supermarket Lorrie and Pam had decided to go Macrossan Park so even though it was about 20kms in the opposite direction to where I was headed I went there too. 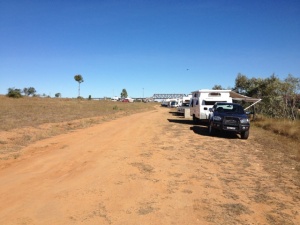 Macrossan Park on the Burdekin 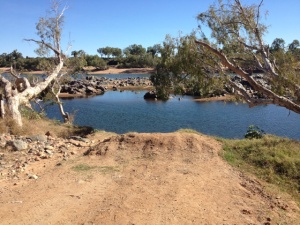 But I didn’t stay – it was dry and dusty and I decided to head back to my original choice, Fletcher’s Creek. This had appealed to me since I first planned my trip before I left Bundaberg. So I said goodbye to the girls and headed back into town to travel 42kms north to Fletcher’s Creek.