Where to begin! For most of January I have been in remote areas without phone or internet reception and I am certainly feeling internet deprived! It also means I am waaaay behind with my blogging….again! I’m now going to make a BIG effort to catch up and share with you some of the wonderful camp sites I’ve been staying in.

Ladybird (Pam Kelman) and I put on our flashing Christmas earrings and had a takeaway chicken for Christmas Dinner to celebrate, and New Years Eve was shared with a motorhome group called the Southwest Wanderers who were in the park for a few days. It was certainly different to most other Christmases I’ve had, but the company was good, the champagne was cold and – I’m living the dream!

2 weeks in a caravan park is unheard of for me, but a rather special thing happened that kept me there! This beautiful blue parrot flew in and landed on my shoulder on Christmas Eve, immediately adopted me as his new mother, and despite all efforts I didn’t find his owner until January 6th.

I must say I really enjoyed his antics and his company but was so glad when his rightful owners turned up and he went home where he belonged.

I didn’t move very far – about 10kms down the road to Stockton Lake. There was a group of Willie Wagtails (Solo Travellers Chapter) there and also Paul and Tania that I had camped with at Cliff Head and Willbinga, so there were many Happy Hours enjoyed with great company. Before most of the group left we had a shared meal and celebrated two January birthdays – Barry and Helen.

Stockton Lake is a popular waterskiing and jet skiing spot so there was always a lot of activity on the water, and the lake itself was great to cool off in as temperatures hovered around 35deg Celcius each day. I was telling Marion, my sister, about the high acidity of the lake and the recommendation you don’t spend too long in the water and her reply was “Go for it! A free glycolic peel!”

In the two weeks I was at Stockton Lake a fellow camper, Helen, made some mosquito nets for my side and rear doors and then excelled herself and made mosquito net walls that I peg to my annexe to give me amazing relief from mozzies and flies! So Brutus the Beast left there with a few accoutrements, and I left there without any mozzie bites! I also left with Barry, a fellow Solo, as we had decided to travel together for a while. 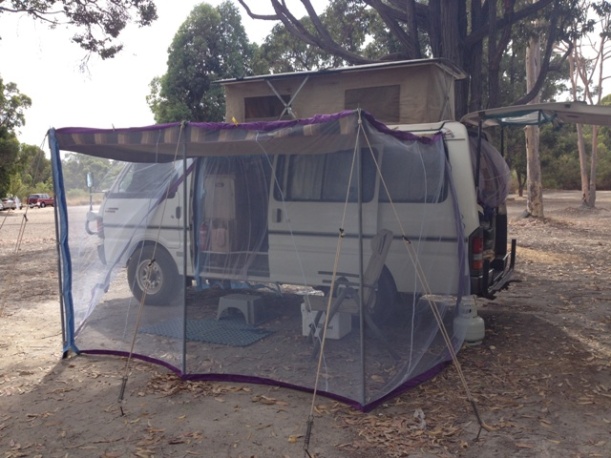