What can I say about Kalbarri except it has spectacular cliffs, amazing gorges, beautiful colours ….. let my photos do the talking! I approached Kalbarri from the South along the coast road and the access to these stunning cliffs was easy, with great viewing platforms. 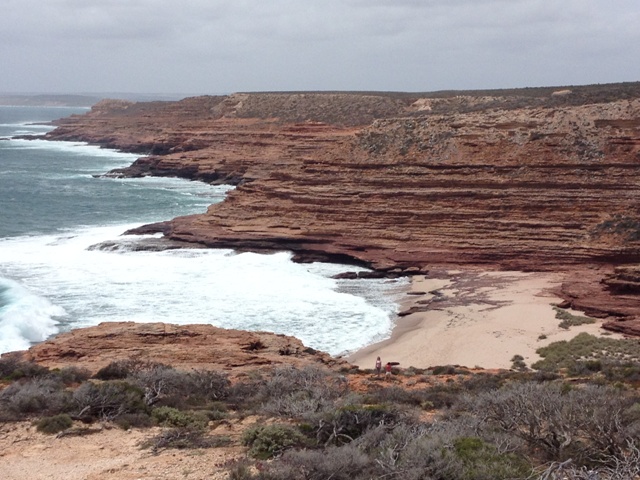 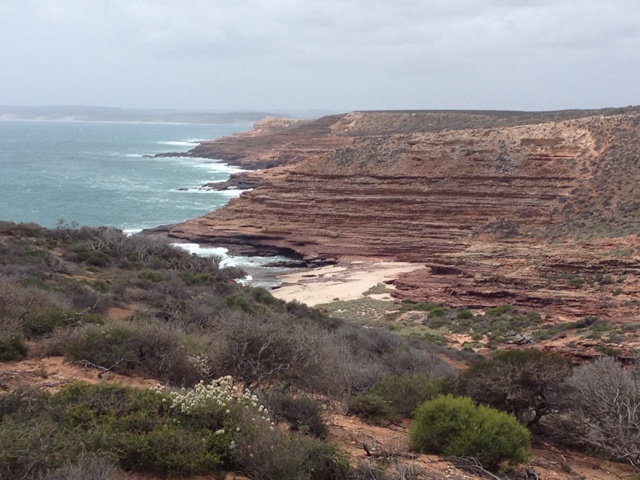 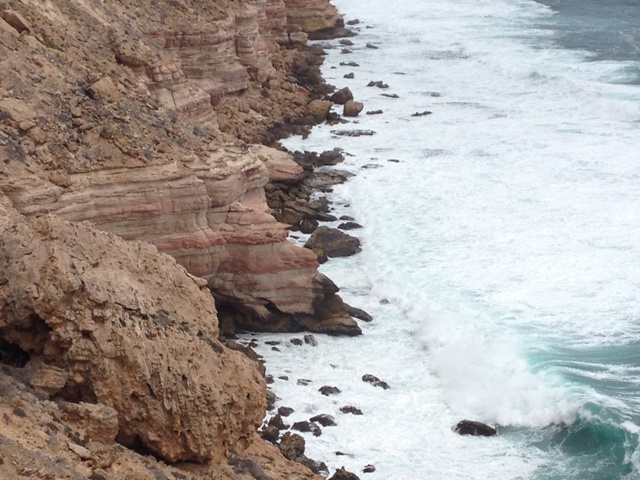 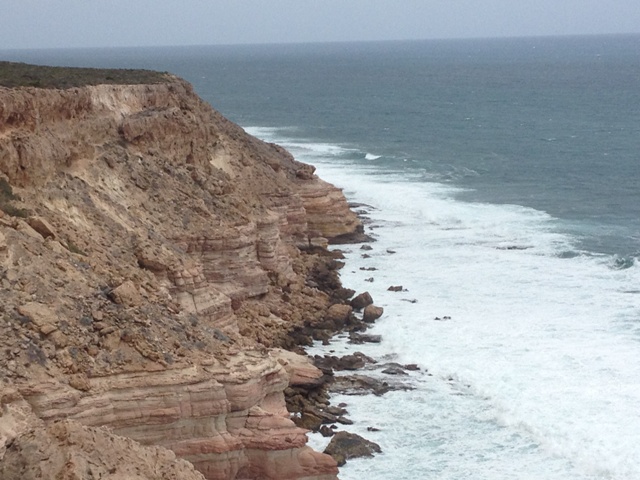 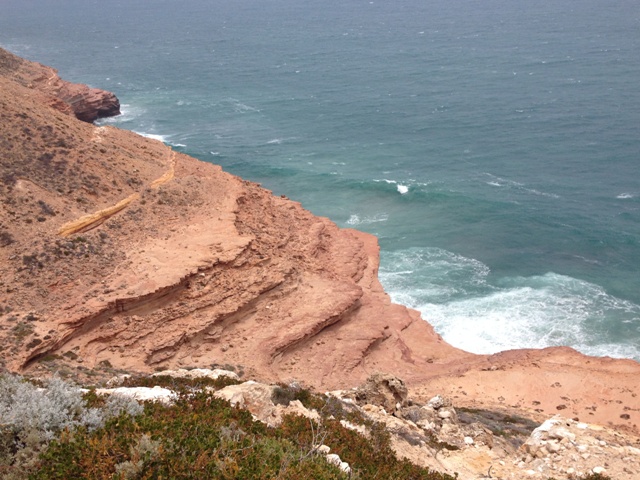 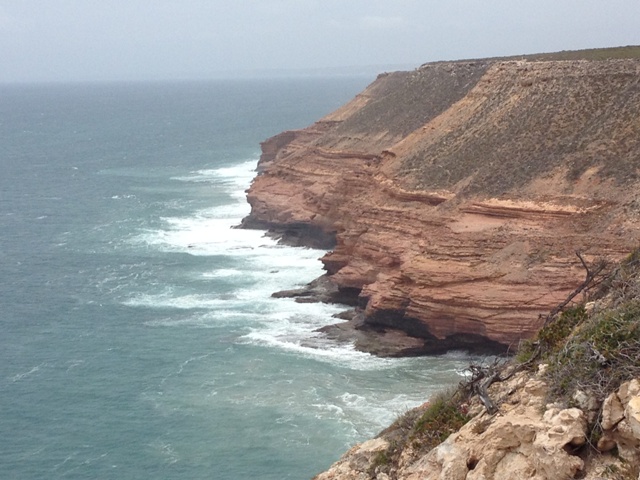 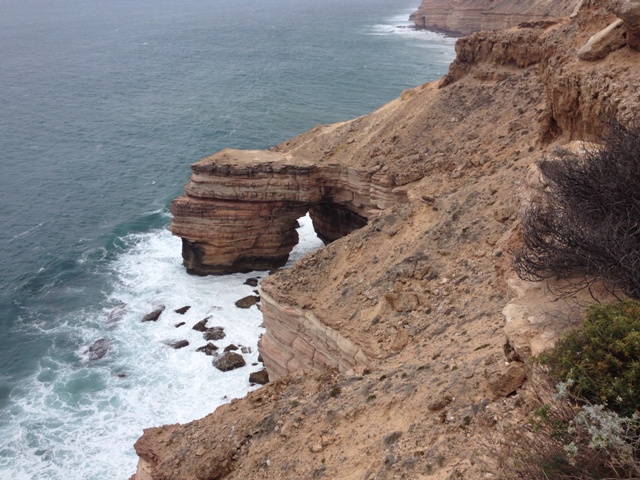 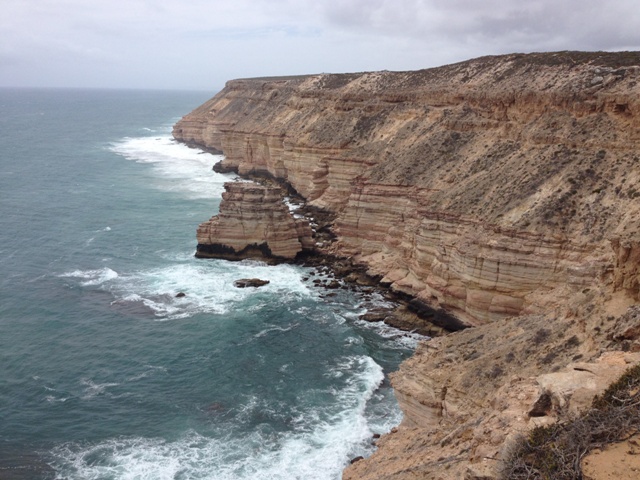 It was really windy on the cliff top – is there anywhere in Western Australia that it isn’t? But I managed to get a couple of shots of flowers by the track. The first one is the Murchison Rose, which is native to this area. 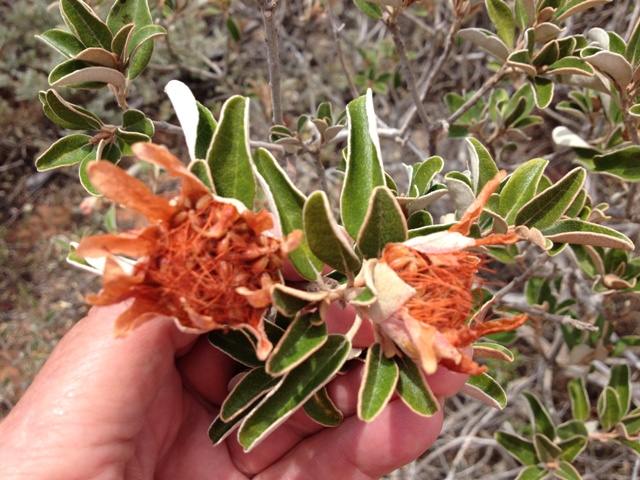 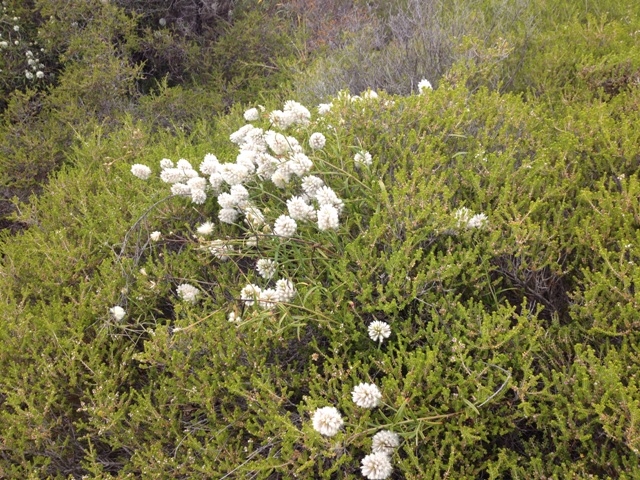 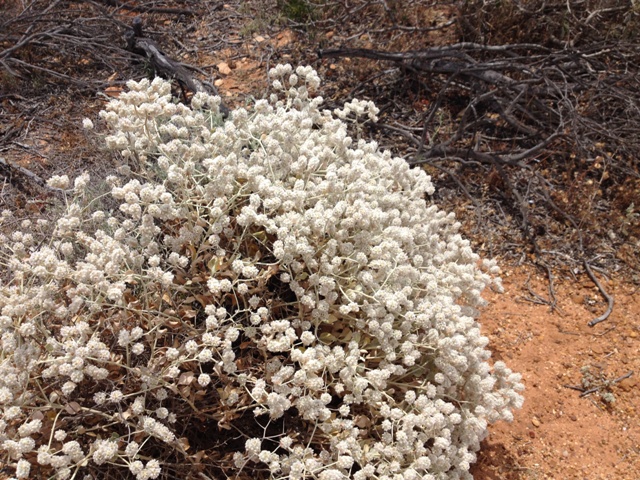 After leaving the cliffs it was a beautiful sight driving into Kalbarri where the river entered the sea and breakwaters had been created to give the effect of huge lakes on the foreshore. And there was the town, nestled in the green, which was also a welcoming sight after the dry and dusty countryside. 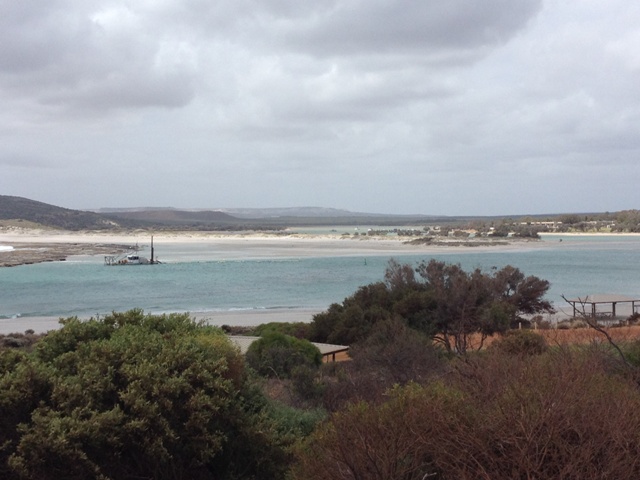 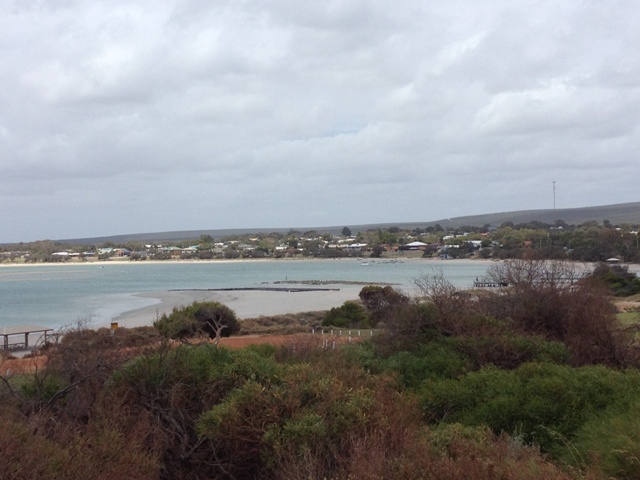 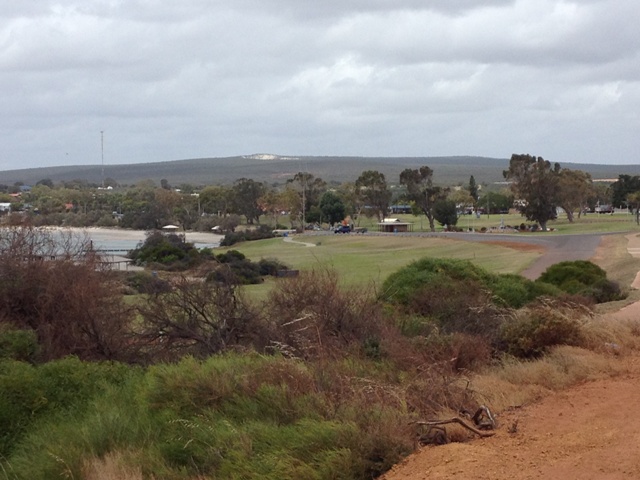 After staying at the Big River Ranch, which was the subject of a previous blog, I thought I’d venture out to the inland sights of the Kalbarri National Park. Well! The road would have had to be one of the worst I’ve ever been on – and believe me I’ve been on a few! At least as bad as my memory of the road from Karratha to Millstream and I didn’t think I’d ever travel on a road like that again! After the 20 something kilometres of corrugation, potholes and sand I finally arrived at Nature’s Window. By this time I was a bit stressed, to say the least, but I picked up everything that had fallen out of my cupboards, shoved the house battery back into its possie that it had jumped out of on the journey, and determined to make the best of it. The view was certainly worth it and negated the short walk in the heat of the day swatting the zillions of flies away! I had last been here around 1973 so asked some other tourists to take a photo of me to replicate the 40 year old one. What do you think? 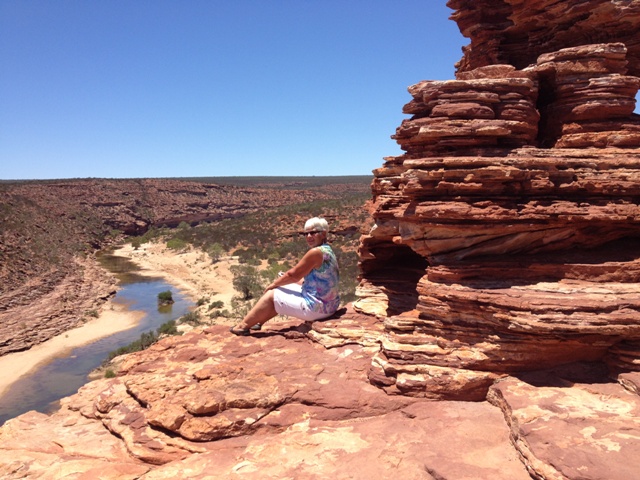 Now that I look at them both together I think the old one might have been taken at the Z-bend, but I didn’t go there this time as I’d had enough of rough roads and couldn’t wait to get back on the black top. Funny, though, I was telling someone about how horrendous I found the road and two days later they drove out there and said it was fine – as smooth as a made road! Must have had the graders through after I’d been there!!

Here’s a couple more of Nature’s Window and the view. 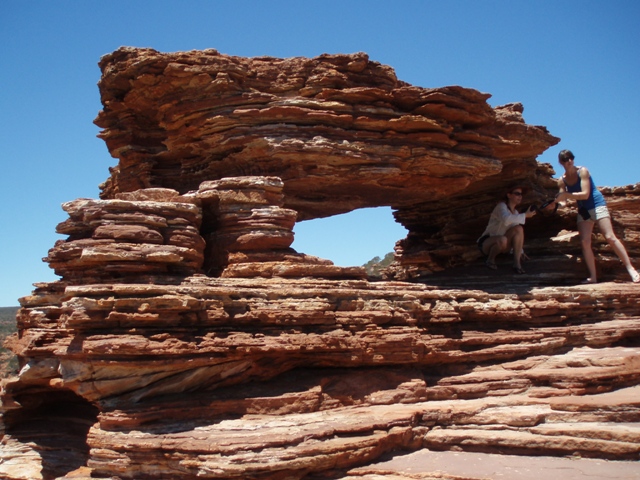 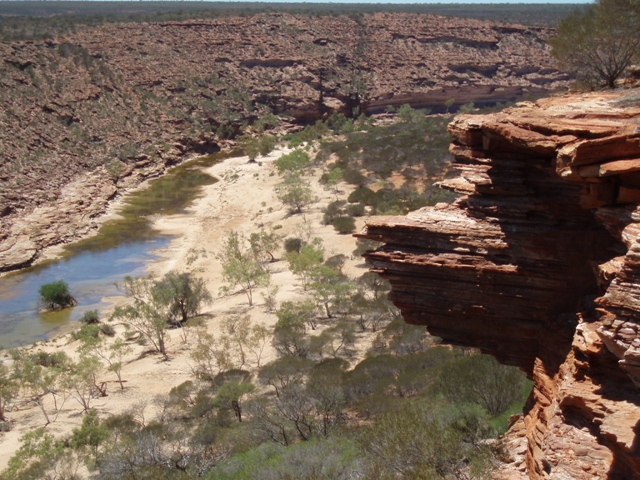 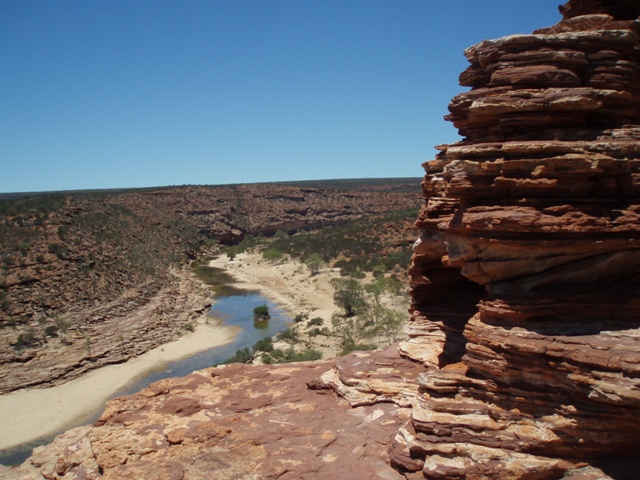 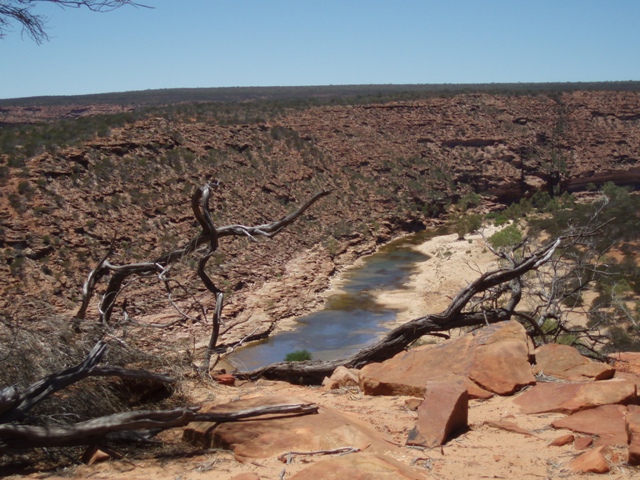 You’ve probably gathered I love trying to capture the different flowers of each area I go to, and there is this vibrant pink shrub that grows on the roadside around Kalbarri. Ignoring the 500 (well, that might be a bit of an exaggeration!) signs that said Soft Edges I pulled over to get a photo and, you guessed it, got back in old Brutus and he was well and truly bogged in the sand! Being an old hand at 4 wheel driving now I promptly changed my hubs over, whacked it into 4 wheel drive and hauled myself out of that predicament. The photos were worth it though, don’t you think? 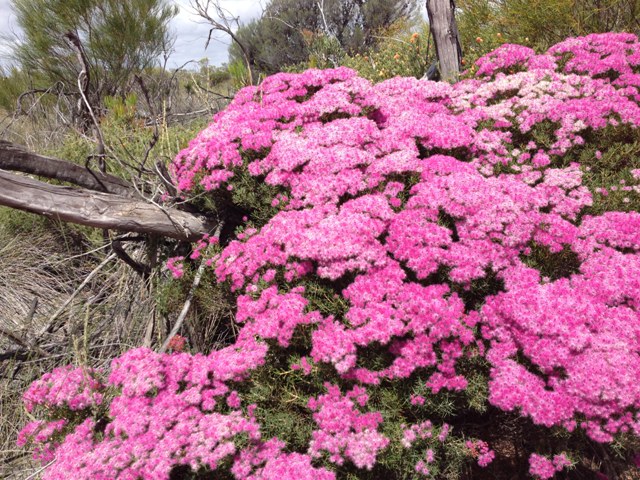 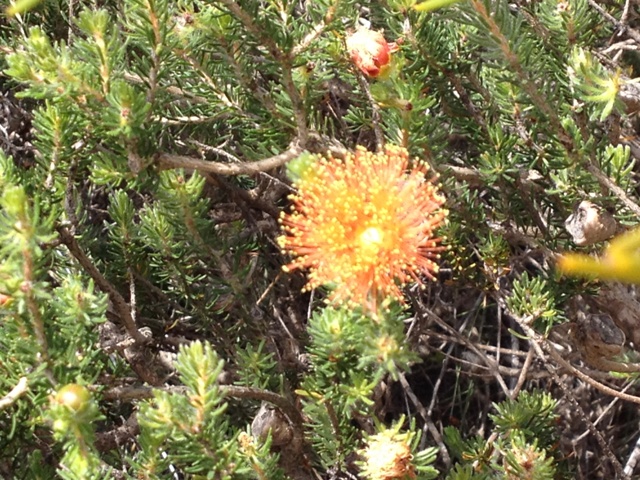 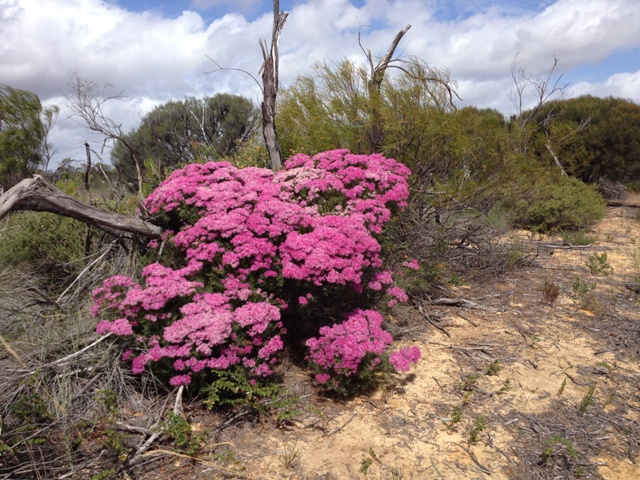 I also snapped a couple of trees that you see along the roadside here. The white one with the long bracts is called Smelly Flower – I didn’t get close enough to find out if it is aptly named, and the vibrant orange flowered tree is known locally as the Christmas Tree. 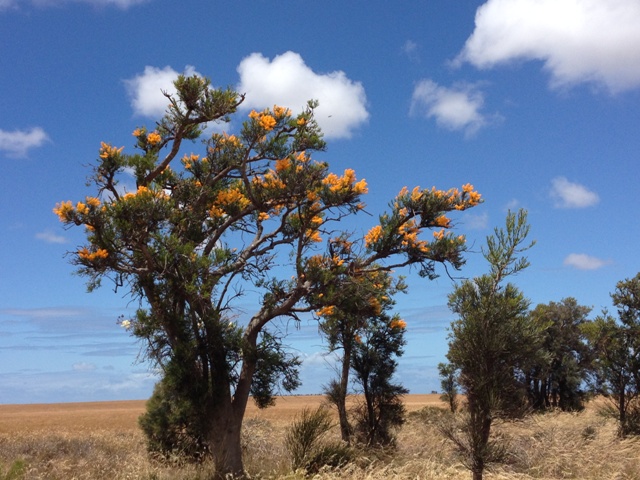 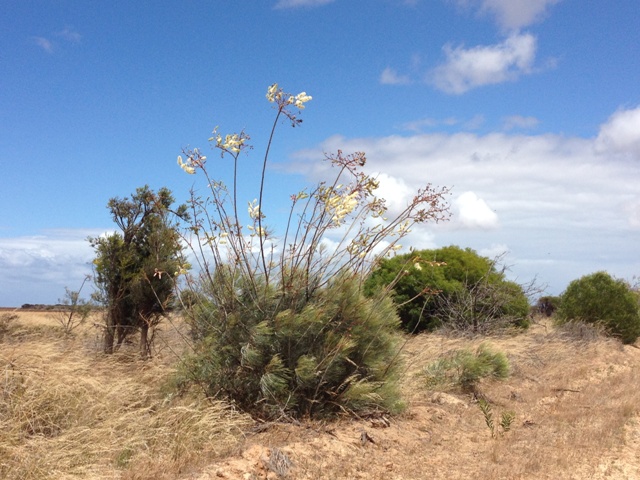 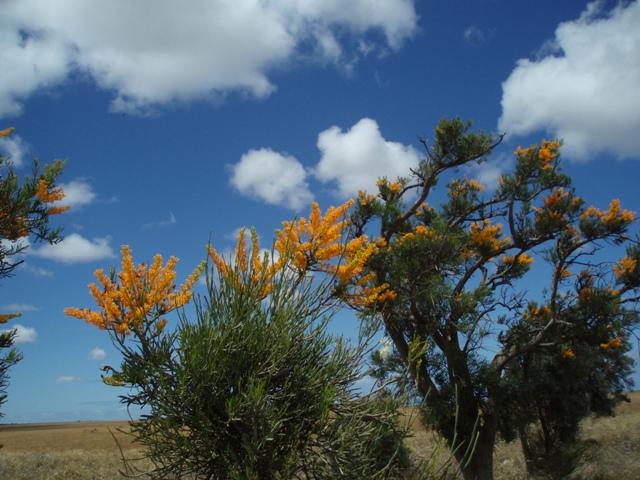 Kalbarri was quite spectacular, as you can see, but I was off to Galena Bridge (free camp) on the way to Monkey Mia and Shark Bay. It’s on the main highway 13kms north of the northern entrance to Kalbarri. Now here’s a lovely oasis for a stopover! 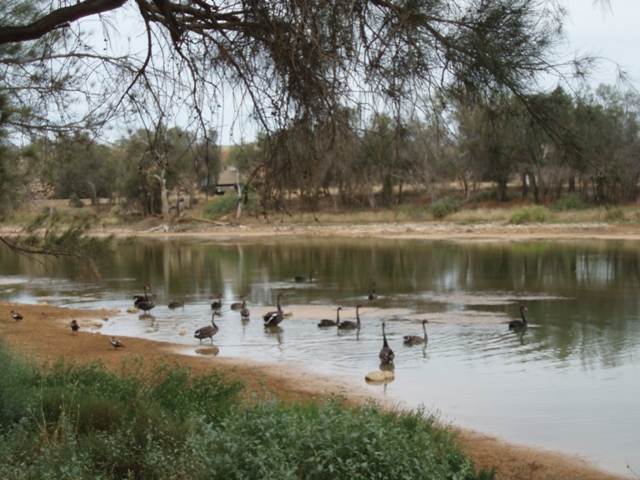 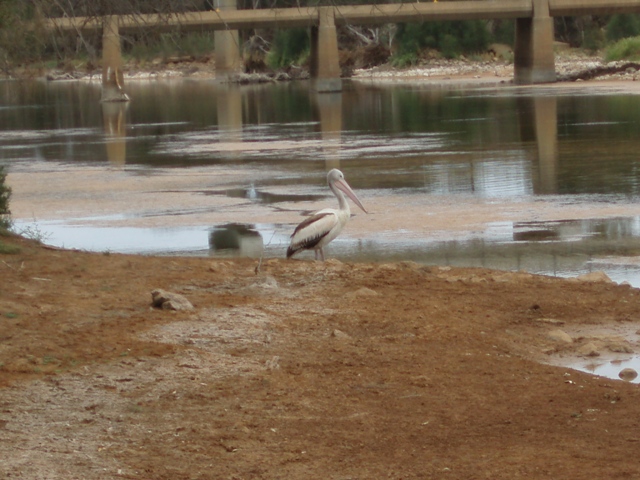 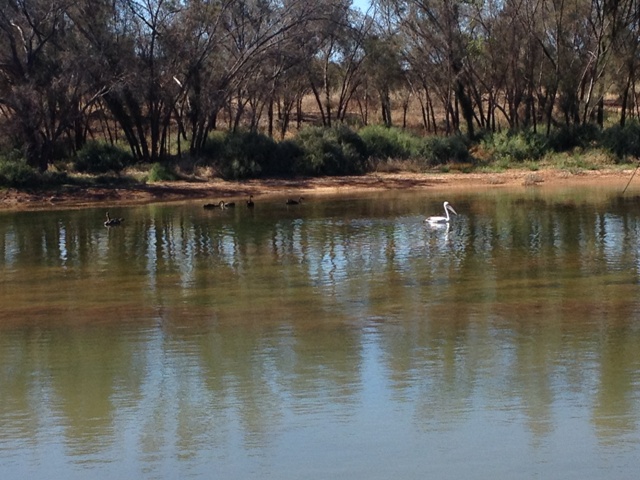 2 thoughts on “Kalbarri – A Picture Says a Thousand Words”