My sister, Marion, and I were finally going to start our travelling together away from the comfort of the ‘known’ environment we had enjoyed at Orange. We have a cousin in Wagga Wagga so thought we’d head in that direction. It was only 320kms away and we could take as long as we liked to get there so out came the trusty Camps book and we picked out some spots to aim for.

We left Orange on Monday morning and headed to a little town called Eugowra, which is noted today for its street murals but in the past was famous for its bushrangers, so they feature heavily in the murals. After all, in 1862 they did pull off the largest gold robbery in Australia’s history!

At Escort Rock near Eugowra Frank Gardiner and his gang of bushrangers including Ben Hall ambushed and robbed the gold escort coach on its way from Forbes to Bathurst in New South Wales.

Eugowra’s Wild rocky hills that so successfully hid those bushrangers of the past now attract a new kind of bushranger to Nangar  National Park and local orienteering events. 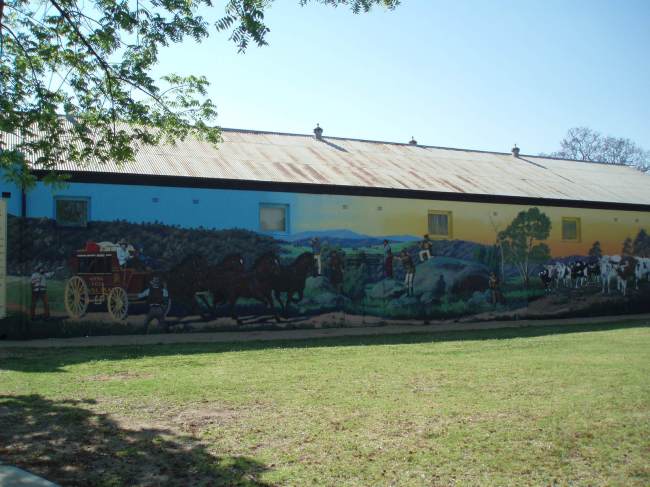 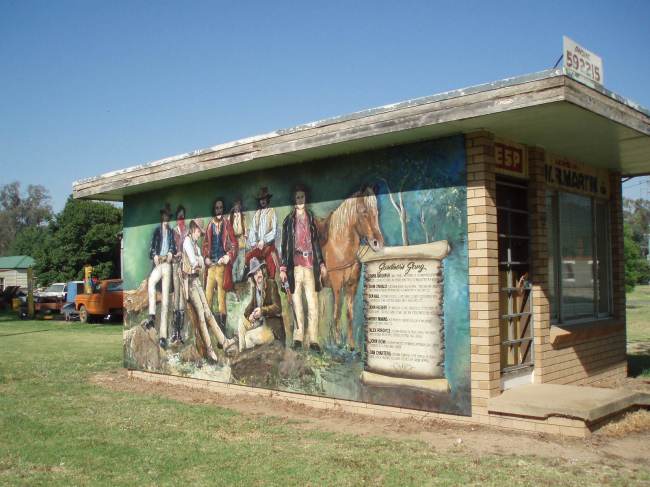 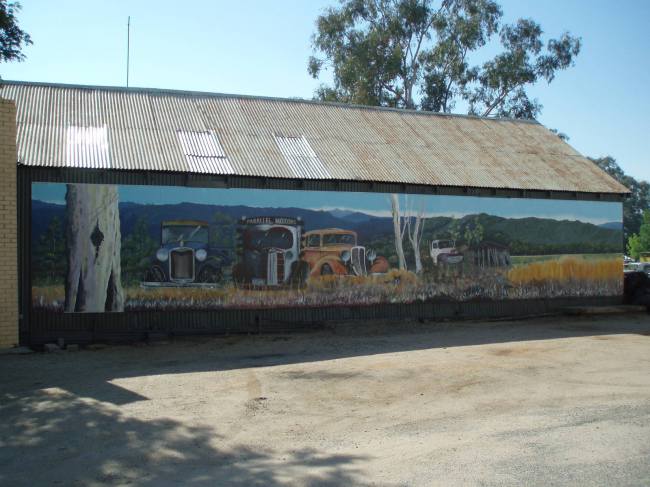 If you click here it will take you to a really informative site about Eugowra, its history and its beautiful natural attractions.

When we looked at our Camps book we decided that we would stay at Gooloogong, for no reason other than it is a famous Australian name (although Evonne did not come from here), and it was also on a river. We are now travelling with Marion’s little Jack Russell (called Jack, of course!) so bushy camps with lots of sticks are the sites of choice. He has a stick fetish and will play with them for hours. This photo was taken at our second camp at Bethungra Dam. 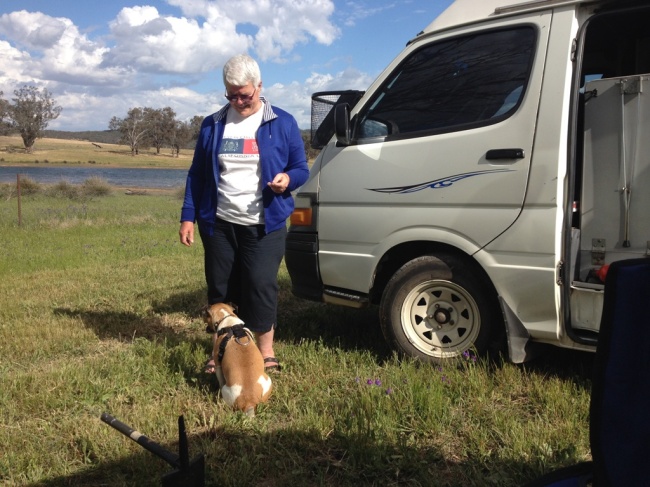 As you can see by the map above we really did a zig-zag route today to get to Gooloogong but on the way we went to Canowindra (pronounced Canowndra – don’t ask me why!) and Cowra.

Canowindra(pronounced ka-noun-dra) is an historic township located on the Belubula River in the central west NSW shire of Cabonne. The name of the town is derived from an Aboriginal word meaning ‘a home’

The river flats along the Belubula River attracted early settlers, gold was discovered and started a flurry of mining but the real riches came from the green gold of Lucerne with massive amounts being grown and shipped.

I thought this was a funny little snippet from the town’s history.

In October 1863, Ben Hall’s gang took over the village for three days and entertained the whole population, as well as some stray travellers, all herded into the inn. An account of the incident was reported in the Bathurst Times, also quoted in the Maitland Mercury. A monument to Ben Hall, on the site of Robinson’s inn, the Travellers’ Rest, was erected in 1951, but evidently further research has indicated that the events recorded here happened at the inn on the other side of the river.

Canowindra today is better known for 2 major tourist attractions – The Age of Fishes Museum and its Balloon Challenge. If you want to see something truly spectacular get to Canowindra next April and see the sky filled with hot air balloons. Here’s a link to the information.

While you are there it’s worthwhile visiting the Age of Fishes Museum. There have been some major fossil finds at Canowindra (bet you’re still pronouncing it as it looks).

Imagine a world ruled by fish! Long before the dinosaurs the mighty rivers of the Central West teamed with bizarre ancient fishes – fish with armour shells, fish with lungs, and huge predators with jaws like crocodiles. Thousands of their fossils were found at Canowindra and give us a unique glimpse into life during the Devonian Period – the ‘Age of Fishes’.

A chance discovery in 1955 revealed an extensive fossil bed dating from the Devonian Period. This 360 million year old formation contained the fossilised remains of over 3500 freshwater fish. Many were new to science. This unique fossil collection is now on public display in the township of Canowindra, only a short distance from the discovery location.

The Museum displays many of these beautiful fossils together with live aquarium displays and wonderful recreations of life in the Devonian.

From Canowindra to Cowra. Cowra is the site of a Prisoner of War camp in the Second World War, and is famous for the Japanese POW breakout in 1944. There is now a beautiful Japanese Garden and an avenue of Cherry Blossom trees to recognise the strong links between Cowra and the Japanese people.

At 1.50 am on the clear moonlit night of August 5, 1944, the largest Prisoner of War breakout in modern military history occurred at Cowra. More than 1000 Japanese prisoners launched a mass ‘suicide attack’ on their guards, Australian soldiers of the 22nd Garrison. To the Japanese, the disgrace of capture could finally be overcome by dying in armed battle.

Armed with crude weapons, four groups each of approximately 300 Japanese threw themselves on to barbed wire fences and into the firing line of Vickers machine guns. Protected only by baseball mitts, blankets and coats and using their comrades as a human bridge to cross the tangled barbed wire, more than 350 Japanese clawed their way to freedom.

All escapees were captured during the following week. A total of 107 POWs were wounded, 231 prisoners died along with four Australian soldiers.

From the tragedy of war and the Cowra Breakout came a long lasting friendship between the people of Cowra and the nation of Japan. There is much in Cowra today which serves as a reminder to these events.

The Cowra website is very easy to navigate and has loads of information about the area and events. Click here if you want to find out more.

It was time to make our way to our camp site for the night.The freedom camp at Gooloogong was a bit of a sheep paddock really, so there were lots of flies that drove us crazy. The river was way down a very steep bank which we decided would be easy to get down to but we weren’t sure we would make it back up to the top, so we looked but didn’t touch, so to speak. Hope Marion is going to enjoy this lifestyle – tonight is not a good introduction!

2 thoughts on “Wending our way to Wagga Wagga – Day 1”