It is amazing to be here and I am in awe of the magnificent natural rock formations of Uluru and Kata Tjuta. 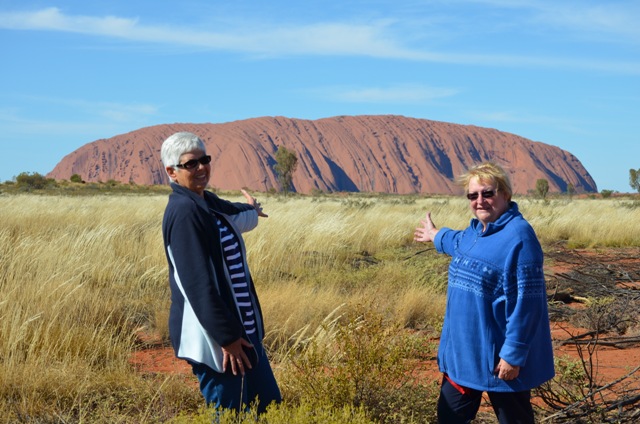 These are intensely spiritual places for indigineous Australians, the traditional land owners, and many white Australians also feel the spirit of these stunning landmarks.

Traditional religious philosophy, Tjukurpa, provides an interpretation of the present landscape, flora, fauna and natural phenomena in terms of the journeys and activities of ancestral beings and consequently binds the people socially, spiritually and historically to the land.

The Cultural Heritage Centre tells the story of how some of the features of the rock are formed and I love these stories that form the basis of the culture and law of the Anangu people. This site I found has the most comprehensive rendition of the stories that are depicted in the Cultural Centre.

And this YouTube clip has Barbara Tjikatu, a tradtional owner of the Uluru-Kata Tjuta region, telling of the Creation Story and how some of the features of the rock were formed.

Here’s another couple of links that give some great information

About Uluru and Kata Tjuta

Fellow Solo traveller Margaret and I camped at Ayres Rock Resort Campground and drove the 20 or so Kilometres to Uluru (formerly known as Ayres Rock) and then a further 50 to Kata Tjuta. Between us we took masses of photos and I hope I’ve chosen some of the best to show you here. Margaret’s have been identified with (MC).

As you move around this massive monolith there are so many different features and I hope we have captured some of the better ones. From a distance you can’t see the hidden crevices and fissures that make the variations so interesting.

NOTE: Our apologies to the traditional owners if we have photographed culturally sensitive areas of Uluru and upon request I will certainly remove any photos that may unintentionally offend.

From Uluru we drove about 50kms to Kata Tjuta (formerly known as The Olgas). Here is some great information:

There are 36 domes that make up Kata Tjuta and they cover about 20 kilometres. Kata Tjuta is a Pitjantjatjara Aboriginal tribe word meaning ‘many heads’ and you can certainly see how it got this name. I never realized these domes were so huge,

Once again, these photos are a combination of Margaret’s and mine and I’ll let them do the talking …

Our Uluru experience is far from over! Today we are attending some of the activities the resort offers such as the Bush Tucker Garden, Indigenous Dancers and Didgeridoo Playing and to cap it all off tonight I am celebrating my birthday at the Sounds of Silence dinner watching sunset over The Rock!

One thought on “Uluru and Kata Tjuta – The Heart of Australia”