I loved my visit to Strahan! Perhaps it was the relief of arriving there after driving the steep winding roads of western Tasmania but I am drawn to the sea and here I was, on the ocean at last. It was hot when we arrived and one of the locals suggested we take a rainforest walk to Hogarth Falls. What a beautiful cool spot to be! 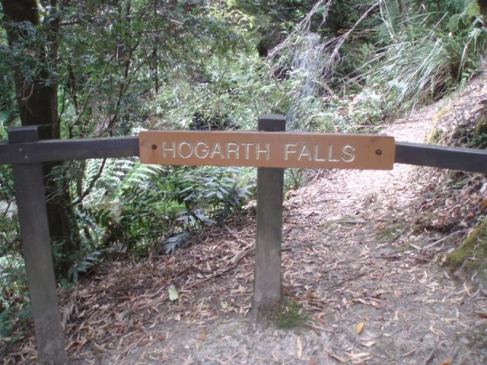 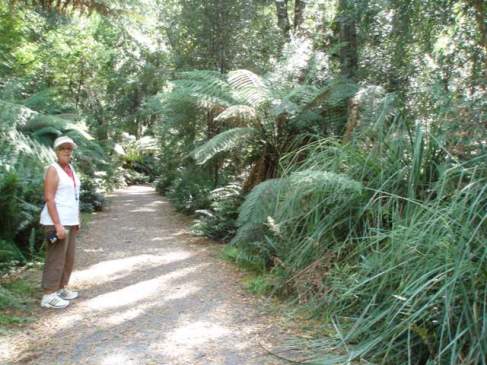 After that we headed straight out to Ocean Beach to set up camp for the night. There were a couple of level spots after the day trippers went home so I thought I was clever and claimed one right on the cliff top overlooking the beach. Not so clever!! The wind blew a gale and I had to put my pop-top down for the night in fear of it being blown away. The magic sunset over the sea compensated for the discomfort though. Broome might have the stairway to the moon but Strahan has a stairway to the sun! 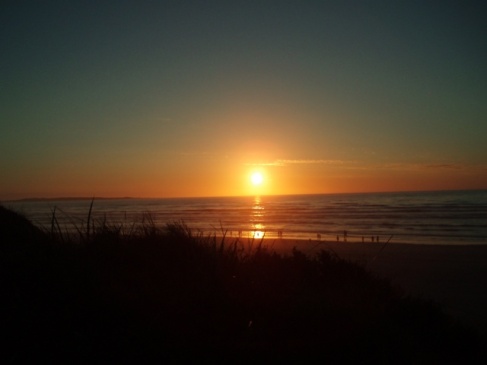 The next day we went back in to town to book our river boat trip through Macquarie Harbour, out to Hell’s Gates and up river to Sarah Island. There are two boats that do basically the same trip but we chose the red and white one which is a 5th generation family owned business.  Another Solo, Glenyce, was arriving in town so we settled into a great little coffee shop and waited for her. Once she arrived we found a spot to camp just out of town for the night and were soon joined by another campervan looking for a stop-over, too. It was an early start the next day for our boat trip, which we were all looking forward to. 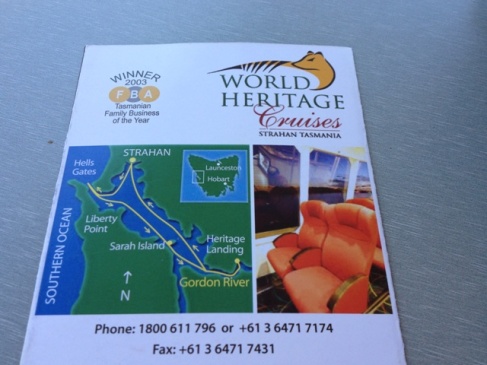 When we booked we paid a bit extra to have window seats but it really wasn’t necessary as the boat wasn’t full so we could sit where we liked. A fabulous smorgasbord lunch was included with loads of Tasmanian smoked salmon and lovely salads. The captain gave a running commentary of what we were seeing and the history of the area. We headed through Macquarie Harbour, which is twice the area of Sydney Harbour but accessible only through the smallest entrance of all major harbours, Hells Gates. The entry is a mere 75 metres wide. 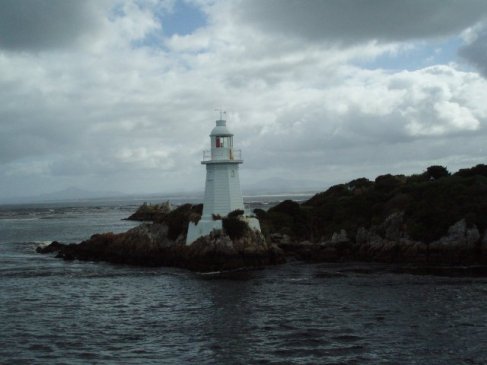 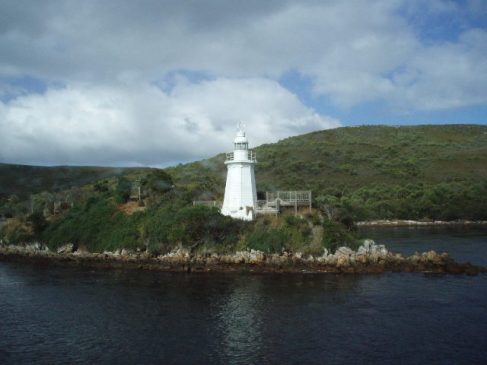 It was given the name of Hells Gates by the convicts who were sent to Sarah Island for punishment – they thought they were going through these gates to  Hell. For 12 years, 1822-1833 Sarah Island was a dreaded convict penal settlement. Only the worst of the convicts were sent there. As we travelled into Macquarie Harbour the captain pointed out the cliffs where crayfish can be caught and we stopped at the commercial fish farms that breed Tasmanian Salmon and Ocean Trout. 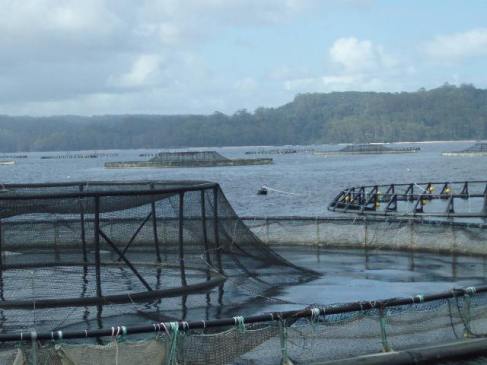 In a little blast from the past, the old Combie Trader that plied the waters off the Queensland Coast has been reborn as a fish processing vessel in Tasmania!

We disembarked at Sarah Island and formed 2 groups with our own guides to explain the history of the island. Disco Dave was our guide and he really brought the history alive. 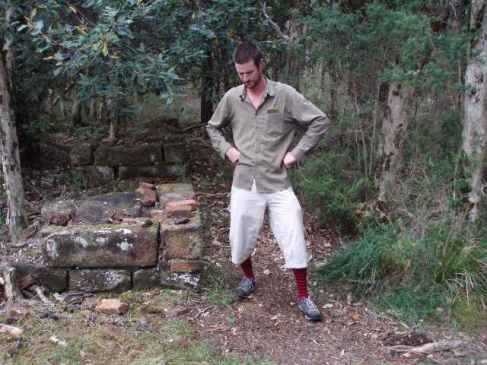 Sarah Island had the reputation of being the bloodiest and most brutal penal settlement in Tasmania. It was used to “root out moral depravity of the criminal classes. Hard labour, cruel and vicious punishment, and the deprivation of all comforts in a harsh and fearful landscape … made Sarah Island a place to be dreaded.” (from the World Heritage brochure on Macquarie Harbour & the Gordon River)

Up to 380 convicts, including some women, were held here guarded by 95 military. Other civilian officials included 14 women and 27 children. To keep the convicts busy their first task was to cut down every tree on the island, so what you see now has grown in the last 190 years. 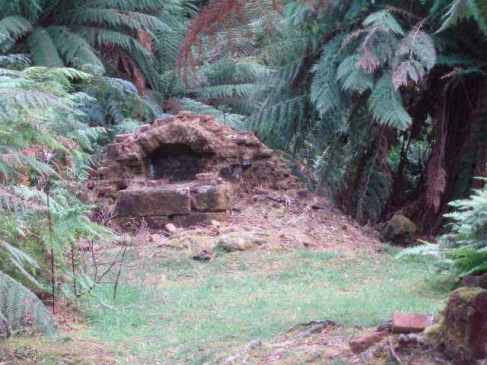 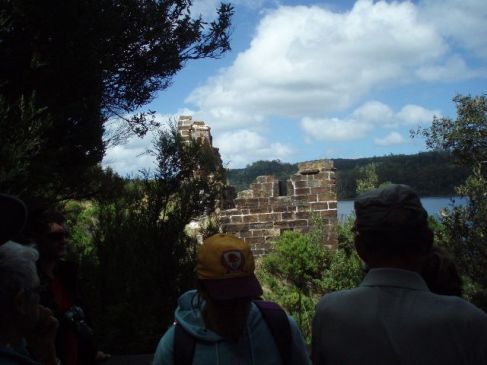 When we left Sarah Island we travelled up the Gordon River to Heritage Landing. The Gordon has the largest flow of all Tasmanian rivers and Heritage Landing is a walkway, built in 1989 through river-flat rainforest. Here we were given some amazing information about the famous Huon Pines. It is incredible to think that they only grow 1mm in diameter every year so you can imagine how old some of those trees were when they were harvested. There is a section of a tree on display that shows major world events that occurred throughout the trees lifetime. 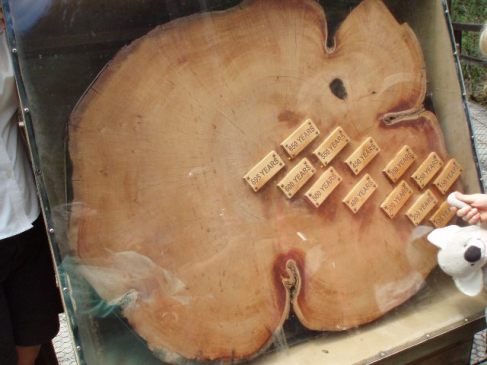 Huon Pines have a very high oil content so they are now harvesting pines that had been felled hundreds, even thousands, of years ago that have been lying in the rivers. They are still in perfect condition to be milled today.

The timber contains quantities of a natural preserving oil called methyl eugenol which allows it to survive on or under the forest floor for centuries. A buried Huon pine log was documented by scientists to have been lying there for 38,000 years! As well as being a preservative, the methyl eugenol provides the timber with natural lubrication, so it can be bent, shaped or sculpted without splitting. It is also waterproof and insect resistant, making it prized as a boat building timber.
Quote from http://huonpine.com/pages/huon-pine-timber.html

As we were walking to the display of the Huon Pine log this fellow was lurking nearby – a pretty big tiger snake. He wasn’t at all interested in us tourists and stayed around for us to get some good photos.

These are the some of the photos I took of the forest walk. I loved all the lichen on the trees – everything had an ‘other world’ look about it. Some said it reminded them of Middle Earth from the Lord of the Rings movies. 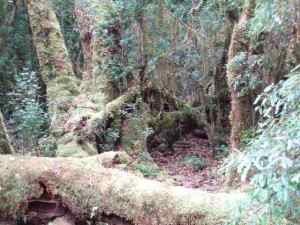 Back on board after a wonderfully full day – so many amazing sights, so much information, so much history – we enjoyed the cruise back to Strahan and after a visit to a Morrisons Huon Pine Saw Mill, Jose, Glenyce and I headed back to our RV’s and camped up for the night at the boat ramp just on the edge of town. We expected to be moved on but the police boat came and went and no-one said a word to us so we bunkered down for the night to get ready for our drive to Queenstown the next day.

One thought on “Strahan – Hells Gates, Huon Pines and Sunsets”